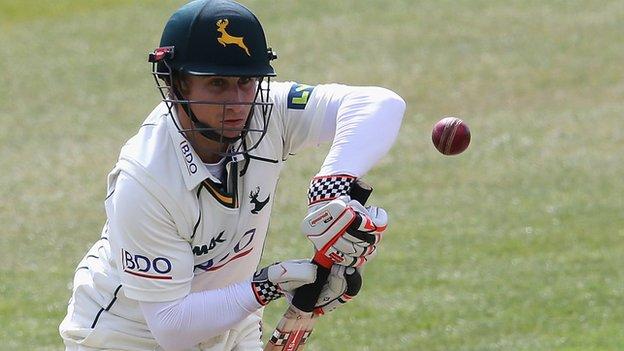 James Taylor struck an unbeaten double century as Nottinghamshire and Sussex played out a draw at Trent Bridge.

Andre Adams (28 not out) and Taylor took Notts to 478-8 before the two captains called the match off.

The result extends Sussex's unbeaten start to the season and moves them up to second in the County Championship Division One table, eight points behind Yorkshire, while Notts remain fifth.

If there was going to be a positive outcome on the final day the visitors, boosted by two late Monty Panesar wickets on day three, needed to make brisk progress on the fourth morning but Taylor and Shazhad were defiant.

The pair batted for more than 60 overs on their way to a seventh-wicket partnership of 200 before Shazhad was caught by Matt Machan off the bowling of Jordan, to give him his fifth wicket of the innings.

Chris Nash then dismissed Luke Fletcher (14), but Andre Adams offered the necessary support to help Taylor towards his double century, an innings which included 21 fours and lasted 501 minutes.

Adams also provided some late fireworks of his own, smashing the penultimate delivery of the match for six.

"James Taylor's fourth career double hundred will have given a further nudge to the England selectors that he is in prime form this summer should the current middle order misfire.

"Taylor's stand of exactly 200 with Ajmal Shahzad led Notts to safety on another wicket crucified by the heavy roller.

"Michael Lumb, Ed Joyce and now Taylor have all scored doubles at Nottingham in the last nine days - what price the first Test being drawn?"