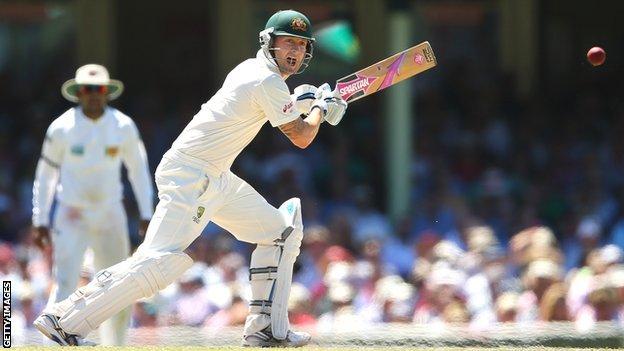 Australia captain Michael Clarke has been passed fit to lead the side in the opening match of their Ashes tour against Somerset, starting on Wednesday at Taunton.

Clarke, the team's most experienced and influential batsman, has been receiving treatment for a recurring back problem.

The 32-year-old has not played since March, when he was forced to miss the final Test of a 4-0 whitewash by India.

"He had a good catch and a bit of a hit in training.

"It's the first match of the tour and obviously the Australian captain is pretty excited to play.

Clarke, who has more than three times as many Test runs - 7,275 - than any other member of Australia's Ashes squad, arrived in England with their Champions Trophy party in May, but was not fit to take part in the tournament as the Aussies went out in the group stage.

Instead, he has been undergoing treatment with a specialist in London in an effort to get him fit for the first Ashes Test at Trent Bridge on 10 July.

In the four-day match against Somerset, he will skipper a side featuring uncapped all-rounder James Faulkner and young pacemen James Pattinson and Mitchell Starc

There is no place for batsman Chris Rogers, although Haddin insisted the 35-year-old had already proved his form with Middlesex this season.

The match gives Australia an opportunity to put the problems which have blighted their tour behind them.

Batsman David Warner was suspended until the first Ashes Test, and fined £7,000 (AU $11,500), for punching England's Joe Root in a bar and coach Mickey Arthur was sacked on Monday, just 16 days before the first Test.

His replacement, former Australia batsman Darren Lehmann, took training for the first time on Tuesday, kicking off proceedings with a long team huddle on the Taunton outfield.

"He loves the guys learning about cricket, has a lot of knowledge is well-respected not only over here but at home. He's very excited about getting the group together and playing some cricket."

Following the four-day game at Taunton, Australia will travel to Worcester for their final warm-up game, starting on 2 July.

And Haddin insisted morale in the camp was good as Australia turn their minds to prizing the Ashes urn from England's grasp.

"It wasn't hard to have a smile on your face today," he added. "It's the first day of an Ashes campaign and if you can't be excited about what lies ahead you are never going to be up for a cricket contest.

"This is the most exciting tour you can play on. The whole theatre around an Ashes campaign is second to none."

For Somerset, opener Nick Compton will have an early chance to make a point to the England selectors after he was dropped for their warm-up match against Essex.

The Somerset side is also likely to include Marcus Trescothick, who helped England win the Ashes for the first time in 18 years in 2005.

The club have sold more than 6,500 tickets for all four days, with about 400 still available on the gate.