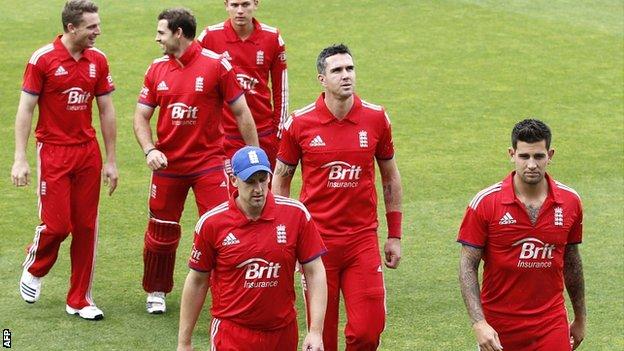 Only two balls were bowled as England's Twenty20 international with New Zealand was abandoned because of rain.

England recalled Kevin Pietersen on his 33rd birthday, his first international game since a knee injury forced him out of the tour to New Zealand in March.

Spinner James Tredwell, captaining the side in place of the injured Eoin Morgan, lost the toss at The Oval.

Michael Lumb flicked the first ball for two but edged the next one to slip before steady drizzle intervened.

A capacity crowd had gathered in anticipation of similar scenes to Tuesday evening at The Oval when 33 fours and 15 sixes were struck in the sunshine as New Zealand won by five runs.

They had been hoping to savour the extra ingredient provided by Pietersen's return but the weather failed to match the occasion and it was a dreary autumnal picture at the famous Kennington venue when umpires Richard Illingworth and Tim Robinson, the former England internationals, abandoned any hope of even a five-over per side contest at 21:07 BST.

New Zealand captain Brendon McCullum had taken a brilliant diving catch to dismiss Lumb but that proved to be the final action of the evening.

It was the 16th meeting between the teams in all three formats since February, England winning seven matches to New Zealand's five, and three series to the Kiwis' two.

The rain brought a premature end to a proud day for Tredwell, who became the first Kent player to captain England since Chris Cowdrey in 1988.

He was put in charge because of an injury to Eoin Morgan, himself a stand-in captain for Stuart Broad, who was absent with a hand injury.

Morgan is due to have surgery on Friday after it emerged he sustained a broken finger in the Champions Trophy semi-final against South Africa on 19 June.

Pietersen, who returned from injury in a County Championship match for Surrey at the weekend and scored 177 not out in the drawn game against Yorkshire, will join up with the England squad for a warm-up match against Essex, which starts on Sunday.

The Ashes series begins at Trent Bridge on 10 July.