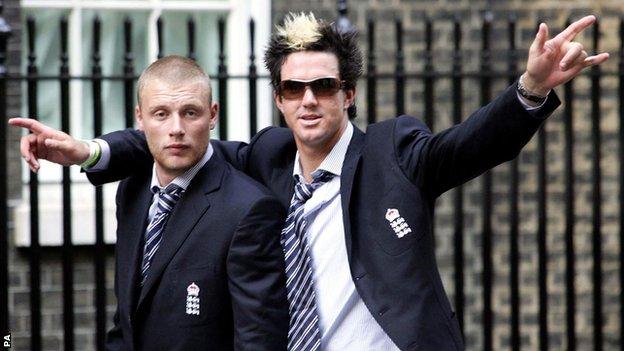 What adjective would you use to describe England batsman Kevin Pietersen?

Brash? Arrogant? Ostentatious, perhaps? Hold on a minute, did someone say introverted?

"I've got this reputation of being confident, yet I go and do all these psychology tests and I'm an introvert," Pietersen tells his former team-mate Andrew Flintoff in an interview to be aired on BBC Radio 5 live on Tuesday at 20:30 BST.

"I'm very much an introverted person. I like my own company, my own family. I don't really go out much.

"I think the confidence has grown from what I've achieved on the cricket field but I'm not as confident as anybody thinks."

The disarming revelation is one of many in Pietersen's fascinating chat with Flintoff, a player with whom he occasionally clashed during the years they shared an England dressing room.

In it, Pietersen talks about growing up in South Africa unaware of what the Ashes were, his see-saw relationship with Shane Warne, his ill-fated spell as captain and his regret over the silly shots that have left him looking "a complete mug" at times.

He opens up about England captains past and present, relives the anguish of injuries and loss of form and reaffirms his ambition to clock up 10,000 Test runs.

Like many top sportsmen, Pietersen is public property, someone we think we know much better than we actually do.

This interview goes behind the bling and the bravado to reveal an insecurity over his image, a recognition of his faults, a light-heartedness - he calls Flintoff "chubby" at one point - and perhaps less surprisingly, an absolute obsession with his performance on the field of play.

After leaving South Africa in protest against the racial quota system - which insisted on a certain number of non-white players in every team - and qualifying to play for England through the Kolpak rule, Pietersen announced himself with three one-day centuries against the country of his birth in early 2005.

He went on to play a decisive role in England's historic Ashes victory over Australia later that year, making back-to-back fifties on his Test debut at Lord's and sealing the series with a breathtaking 158 at The Oval.

The sheer audacity with which Pietersen took on the team that had dominated the game for more than a decade was jaw-dropping, but as he reveals to Flintoff, his close relationship with Australian talisman Warne - they were team-mates at Hampshire - was one of the major reasons why he settled so quickly into Ashes cricket.

"Having the great Shane Warne as my mate, walking onto the field and not having him hammer me from first slip, but just laugh and have a joke helped a lot," says Pietersen.

"I think I could have been fearful playing Australia but because this huge figure was a mate of mine, it calmed things down."

There was nothing calm about the celebrations that followed England's Ashes win as the players famously partied the night away before arriving at a Downing Street reception the next morning somewhat the worse for wear.

One photograph shows a sozzled-looking Flintoff and Pietersen arm in arm outside Number 10, the former with eyelids sagging over reddened pupils and the latter looking bedraggled with a loose tie, sunglasses and a haircut which he jokingly refers to as "the skunk".

As they reminisce over the mayhem, Pietersen is less certain than Flintoff that he would do the same again.

"The reason I don't enjoy [looking back] is that I can't remember it," he says.

"We probably deserved it because we had just beaten Australia and I think winning series like that need to be enjoyed but I also remember beating Australia in Australia and winning the World Twenty20 in the Caribbean and thinking 'do you know what, just enjoy it, just walk around and take it in'.

NB Fixtures and start times are subject to change. The BBC is not responsible for any changes that may be made

After the boozing came the backlash, and the painful memory for both players of the 5-0 whitewash by Australia in the return Ashes series down under. With Warne now very much foe not friend, and Flintoff struggling with the demands of captaincy, England were blown away.

"When Australia were looking at what had gone wrong in 2005 one of the things they put it down to was Warne's relationship with me and they said that had to change," says Pietersen, 33.

"He threw the ball twice at me in Brisbane and our discussions got really, really personal in the middle. Off the field he called me Kevin, not KP or PK. It had totally changed."

Despite the provocation from Warne, Pietersen enjoyed a prolific series with the bat, averaging more than 54. His reaction to the defeat, however, hinted at the friction with his team-mates that flared up so spectacularly last year.

"I was extremely disappointed - I didn't deal with it the right way," he admits.

"I don't think I related to it in Australia - because I got 500 runs and I was thinking 'why did we get smashed?' I don't think that went down well with some people."

In one of the most introspective sections of the interview, Pietersen explains that he learnt to deal with the failings of his team-mates when he was going through a bad patch of his own in 2010.

"Until you go through the depths of despair as a sportsman you don't understand the good stuff or the bad stuff," he says.

"The hardest time was on a Bangladesh tour in 2010. I didn't know which end of the bat to hold. I just couldn't hit the ball and I ended up sitting on a bus and thinking 'where is my career going to go?'"

Fortunately for England, a spell in South Africa with his mentor Graham Ford soon put things right and set Pietersen up for one of the most prolific periods of his career.

There was a double-hundred in Adelaide in England's 3-1 Ashes triumph in 2010-11, another at Lord's in the 4-0 whitewash of India in 2011, and four more hundreds before a knee injury sidelined him in March.

They included the defiant 149 against South Africa at Headingley last year, before the discovery of his "provocative" text messages to the opposition dressing room saw him dropped for the final Test at Lord's, and the brilliant 186 against India in Mumbai that confirmed his "reintegration" into the England side.

That century was Pietersen's 22nd in Tests, briefly taking him alongside Wally Hammond, Colin Cowdrey, Geoffrey Boycott and current captain Alastair Cook at the top of England's all-time list.

Pietersen describes the less extravagant but more consistent Cook - who has since taken his own tally of tons to 25 - as "such a nice guy" who will go down as "one of the greatest cricketers in terms of statistics to have ever played the game".

As for his own legacy, in a closing passage to the interview tinged with regret, he concedes that his tendency towards showmanship may leave him short of his ultimate ambitions.

"I've always said I just want to get the best out of my talent and when I've finished my career I just want to say I've done the best that I possibly could," he explains.

"But I know that because of the way I play I'm not going to have done the best I could because I get myself out for 20, 40, 60 or 70 all the time. That will be the man on the shoulder that says I think you've done OK, but…"

KP, in his own words. Introverted? No chance. Interesting? Certainly.