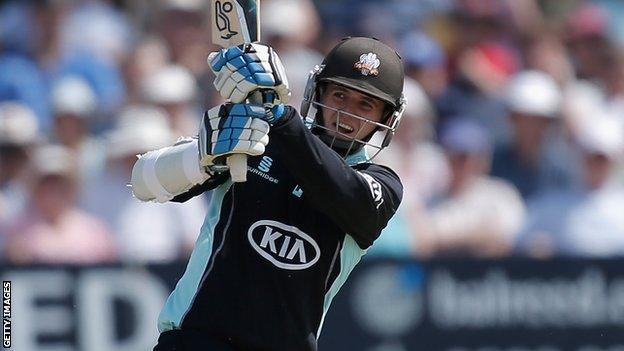 Surrey wicketkeeper-batsman Steven Davies says a change in his approach has improved his batting in Twenty20.

He told BBC London 94.9: "In the last couple of years I feel I've got out too soon, certainly in the first six overs.

"I wanted to concentrate on batting for longer this year and still scoring at a decent rate. Fortunately I did that and it obviously benefitted the team."

We know as batters that if we get a decent total then, the majority of the time, our bowlers will do a great job at the death for us

Davies' innings at Canterbury took its toll as the England international was unable to return to the field and keep wicket for Surrey.

"I came off and was sick in the end," he said. "We only have a 10-minute turnaround, which just wasn't long enough for me.

"I was struggling and we are pretty lucky that we have a few keepers in the squad. Garry [Wilson] took the gloves and I took a bit of a rest."

Davies was quick to praise Surrey's bowlers for restricting Kent to 145-9 and securing the Oval outfit a second victory from their three opening games in the South Group.

"It was a pretty important game for us and we played pretty well," he said.

"We know as batters that if we get a decent total then, the majority of the time, our bowlers will do a great job at the death for us.

"Jade Dernbach's and Azhar Mahmood's last couple of overs were magnificent and got us over the line."