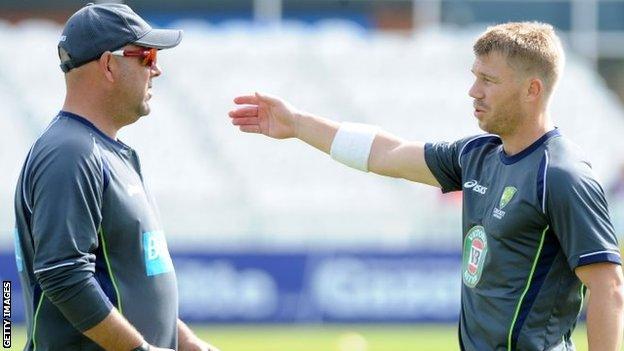 Controversial Australia batsman David Warner is "very much" in the mix for next week's Ashes opener against England, coach Darren Lehmann has said.

Warner is suspended until the Trent Bridge Test after

But Lehmann has been pleased by his attitude in training and believes he has the ability to trouble England.

Lehmann said he had talked to Warner about his behaviour and was prepared to give the batsman another chance.

"The slate's pretty clean with him," he added. "We've spoken about it and dealt with it. We'll move on. Just sensible, straight down the line chat, and we won't have that issue again."

Warner, who averages 39.46 in 19 Tests, was banned for the tour win over Somerset last week and cannot play in the final warm-up match against Worcestershire starting on Tuesday.

Lehmann has already announced that meaning that Warner - who has opened in all but one of his 34 Test innings - would be batting in an unfamiliar position.

The issue does not concern Lehmann, who could even deploy Warner as a counter-attacking number six if he sticks with his top five for the Worcestershire game, with Ed Cowan, Michael Clarke and Phil Hughes at three, four and five.

"He can bat anywhere," said Lehmann. "We can't use him in this game, so he's had to impress more in the nets, which he's doing."

Speaking one week into his new job and nine days before the start of the Ashes, Lehmann reaffirmed his commitment to playing "an aggressive brand of cricket".

Last week in Taunton, Australia took a calculated risk by declaring their first innings just one run ahead of Somerset's total but went on to win by six wickets.

"We want people to love watching us play and come through the gates," added Lehmann.

David Warner is a loose cannon for Australia, but he is still a potential match-winner.

There's not a lot of belief in this Australian team. This line-up cannot score runs consistently.

A focused and on-form Warner would certainly boost their chances.

"We won't stand back, we will be in the contest. You will see an aggressive side but more importantly a side that respects the traditions of the Ashes but plays the brand of cricket that people want to come and see.

"We're going down this path and we're going to stick with it. I've said to the lads all along that we're not going to waver from that - jump on board and enjoy the ride."

Former Yorkshire batsman Lehmann, who has previously coached Queensland, Deccan Chargers and Kings XI Punjab, said it was a "no brainer" to accept the Australia post, but admitted his life had been turned upside down.

"I was supposed to be in Yorkshire with my wife having a barbecue and a beer at the moment with some family," he said. "Times have changed - it's been an eventful few days."