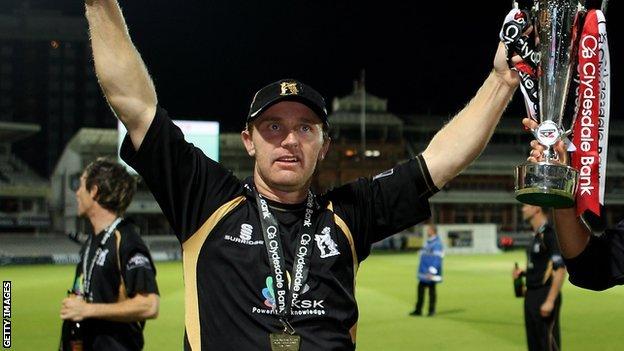 Former England player Darren Maddy is to retire at the end of this season.

The 39-year-old Warwickshire all-rounder intends to finish his career in September - at the end of his 20th summer in first-class cricket.

Maddy was with Leicestershire, his native county, for 13 years, during which time he played three Tests and eight one-day internationals.

He signed for the Bears in 2007, taking over as skipper within a month of his debut.

After relinquishing the captaincy at the end of the 2008 campaign, during which time he was recalled by England to play in the World Twenty20, he has carried on playing under Ian Westwood and Jim Troughton.

But he has so far been limited only to YB40 games this season, having made just one County Championship appearance.

"I realise that it's the right time for me to bow out and give more opportunities for many of Warwickshire's promising youngsters to come through and help build on the success of recent seasons," said Maddy.

"I've enjoyed a fantastic career, which I never thought would be possible when I signed my first professional contract with Leicestershire in 1991."

After making his professional debut in a Sunday League match for Leicestershire against Derbyshire in 1994, Maddy has since gone on to play 282 first-class games, as well as 361 List A and 87 Twenty20 appearances, compiling a combined 39 centuries in all formats.