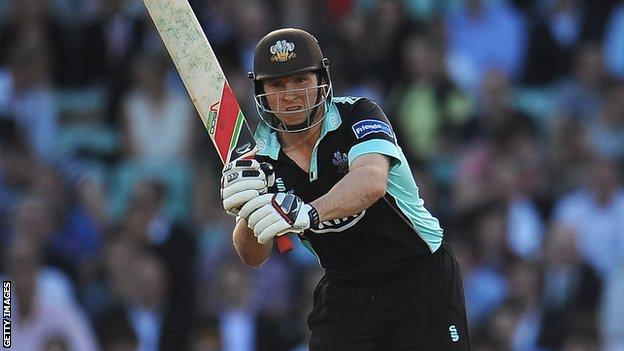 Surrey's Garry Wilson believes the side will only improve their batting performances in this season's FLt20.

The Oval outfit sit top of the South Group with three wins from their four matches following Wednesday's three-run victory over Sussex.

The wicketkeeper-batsman told BBC London 94.9: "We probably haven't hit our top form with the bat yet.

"You only have to look at the line-up to think we should be scoring 180 every time. We are going to click one day."

Credit has to go to the bowlers with the way Jade and Azhar bowled those last four overs. It was a great win and they don't come much better than that

Ireland international Wilson played a crucial role in Surrey's victory over the Sharks, hitting an unbeaten 44 to help them to a total of 139-6.

However he was quick to praise death bowlers Jade Dernbach and Azhar Mahmood for their contribution.

"I feel like I am hitting the ball pretty well at the minute and it's nice to contribute," the 27-year-old added.

"Credit has to go to the bowlers with the way Jade and Azhar bowled those last four overs.

"In his last over Azhar stood back after every ball, thought about what he was going to do next and executed his skill.

"It was a great win and they don't come much better than that.

"The atmosphere was amazing and to win like that in front of your home crowd is unbelievable."

Wilson will now miss Surrey's London derby against Middlesex on Friday night as he will be on international duty.

The Dundonald-born player is in the Ireland squad for their two World Cup qualifiers against the Netherlands on Sunday and Tuesday.

"I'm leaving the team in a pretty good place with three wins from four," he said.

"If we can get another win we will be sitting nicely going into the little break.

"It's unfortunate I have to leave but it gives me an opportunity to go away and play two really important games for Ireland.

"We can qualify for the World Cup and I'm pretty confident."