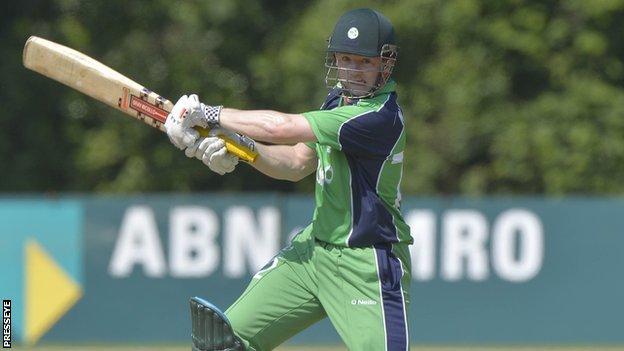 Ireland are on the verge of qualifying for the 2015 World Cup in Australia and New Zealand after beating the Netherlands by 88 runs in Amsteelveen.

Ireland scored 236 all out off 49.5 overs, William Porterfield top-scoring with 79 and Niall O'Brien adding 70.

The Dutch were bowled out for 148 off 36 overs in reply as Kevin O'Brien ended with figures of 4 for 13.

The home side looked well placed at 77-2 but wickets then fell steadily and the Irish ran out comfortable winners.

The World Cricket League game began poorly for the Irish as Paul Stirling returned to the pavilion as an early casualty, having scored just one run.

Ireland recovered to post a creditable score, thanks mainly to the efforts of opener Porterfield and Niall O'Brien, who put on a partnership of 125 for the third wicket.

Middle order batsman Kevin O'Brien contributed a quick-fire 32 off 22 balls, including a six and three fours.

Wesley Barresi led the Dutch response with a score of 55 off 67 balls, including eight boundaries, while Peter Borren put up some late resistance with 34.

In addition to O'Brien's heroics with the ball, Stirling took 2-28 and Tim Murtagh, Alex Cusack, John Mooney and George Dockrell each claimed a wicket.

For Railway Union all-rounder O'Brien, it was his best-ever one-day international figures as he ripped out the Dutch middle order.

His haul included the important wicket of the prolific Tom Cooper for just eight.

Stirling had dismissed the dangerous pairing of Stephan Myburgh (22) and Michael Swart (1), and when O'Brien got in on the act, the pendulum had swung decisively in favour of the Irish.

Earlier, Irish skipper William Porterfield had benefitted from an early reprieve, when he was dropped second ball for 0, to anchor the Irish innings.

Edgar Schiferli had earlier taken the wickets of Stirling and Ed Joyce (22) to leave the Irish in early difficulty.

O'Brien struck four boundaries in his 70 from 107 deliveries, as he and Porterfield showed all their experience to rescue Ireland from a potentially difficult position.

In the end though it was more than enough, and Ireland have one foot on the plane to the 2015 World Cup.

Ireland now have 19 points from 11 games, four ahead of Scotland with a match in hand.

That game takes place at the same venue on Tuesday, where another win will secure not only qualification but the outright title of World Cricket League champions.