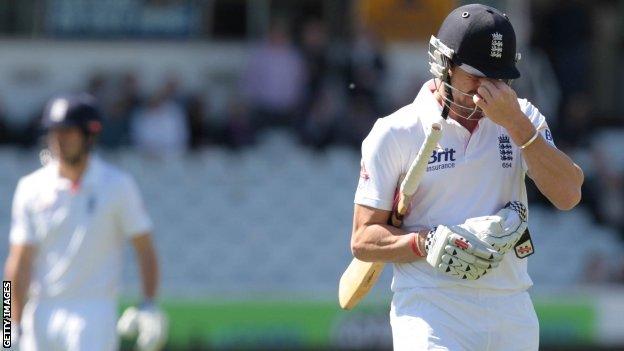 Australia captain Michael Clarke said he was "happy" batsman Nick Compton was left out of the England squad for the first Ashes Test.

Compton, 30, who scored two Test tons in New Zealand this year and an 81 and 79 against Australia recently, was dropped in favour of Joe Root, who will open the batting with Alastair Cook.

"I'm happy Nick's not playing to be honest. He's got a bit of class and has good defence," said Clarke.

"We haven't bowled to Joe Root yet."

The Australia skipper was speaking at Trent Bridge on the eve of the first Test which begins at 11:00 BST.

Compton initially lost his place when he was replaced by Root as opener for the Ashes warm-up match against Essex.

The Durban-born batsman, grandson of the late England batsman Denis Compton, made his Test debut in India in November, scoring 208 runs in the four matches at an average of 34.

The Somerset player shone during the tour in New Zealand earlier this year but struggled in the home series against the same opposition in May, scoring just 39 runs in four innings.

Root, on the other hand, scored a match-winning 71 from 120 balls against New Zealand at Lord's in May and followed that up with his maiden Test hundred in the second Test at Headingly to put himself ahead of Compton in the thinking of the selectors.

The 22-year-old has been in excellent form since making his Test debut against India in December - averaging 42.40 from 11 Test innings.

"I think what has impressed everyone is that he's batted exceedingly well," said England captain Cook.

"He's managed to change his style and I can see no reason as to why he couldn't handle himself.

"He's a fantastic young player, he still has some room for improvement, but I think he will be absolutely fine."

England are odds-on favourites to win their third successive Ashes series, and Cook said there was a mixture of "excitement and nerves" among his players.

"Everyone is desperately excited to be here and we've pretty much arrived now," he added.

"There's some nerves floating around but there's excitement too. We have to remind ourselves just how lucky we are and you have to take yourself out of the moment and enjoy it."