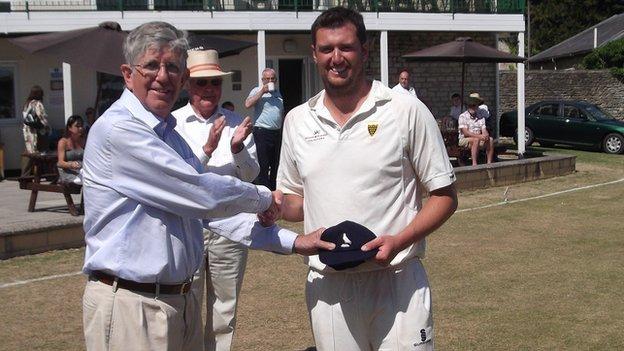 Cornwall spinner Neil Ivamy was stunned after his at Corsham.

The left-arm spinner produced figures of 7-34 in the hosts' second innings to force an unlikely victory.

"It was crazy really, we sat there afterwards on the field having a beer and we all said to each other 'what just happened'.

"At one point my figures were 6-8 and I was thinking, what is going on here," Ivamy told BBC South West Sport.

The 29-year-old from St Columb-Major was awarded his county cap, 10 years after he made his debut against Wales.

Wiltshire were cruising at 55-0, chasing the 201 required for victory, when Ivamy helped reduce the hosts to 81-8.

They were eventually all out for 150 to hand a victory to a Cornwall side who had trailed by 151 on first innings.

He added, "After lunch it felt like we were going to take a wicket with every ball - it was an amazing turnaround and I was so chuffed to get my cap afterwards."

Cornwall manager Godfrey Furse was delighted with his young side and had special praise for the Redruth spinner, who returned his best figures in any form of cricket.

"That's one of the best wins I've seen in 30 years of being involved with Cornwall - just incredible," he said.

"Ivers bowled exceptionally well but he was even better today.

"That was a match-winning performance and he thoroughly deserves his county cap.

"They'll gain a lot of confidence from a win like that, it's a young team with a brand new captain, so this is fantastic for them."