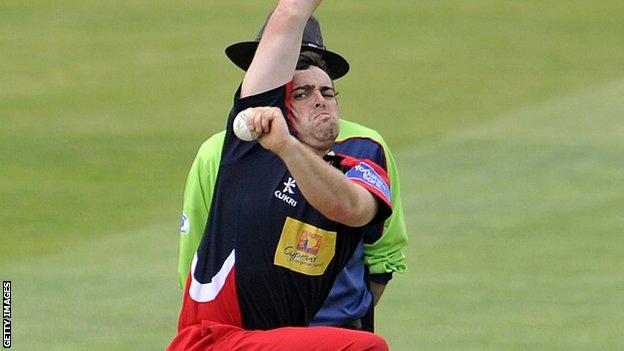 Left-arm spinner Stephen Parry may not play again for Lancashire this season after breaking his forearm.

The 27-year-old, who is was struck on his bowling arm during net practice.

"It's a real disappointment for us. He's going to have surgery on Friday and it looks like it might end his season," said coach Peter Moores.

"When it's a break, at least you know what it is and you can get it fixed."

Parry's involvement with the Lancashire first team has mainly come in limited-overs cricket, although he in May.

The injury will keep Parry out of the remainder of the FLt20 campaign, although Moores added that the Red Rose have other spinning options he can call upon.

Speaking to BBC Radio Manchester, he continued: "Arron Lilley's come in and done well. Simon Kerrigan hasn't played in the T20 yet so we've got a great replacement in Simon, but we all feel for Steve.

"He's one of the heartbeats of the squad. He's pushing hard to be a part of the Championship team and is an integral part of the one-day team."