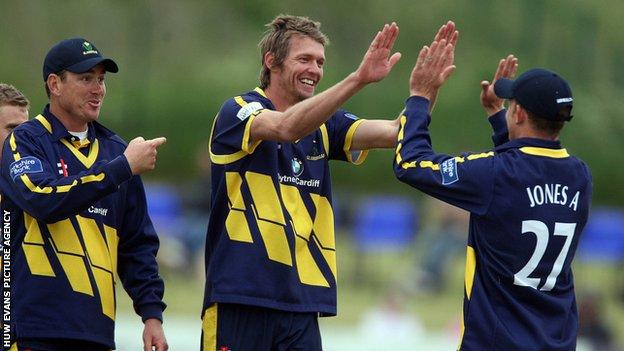 Glamorgan are hoping to beat their record Friends Life T20 crowd in a bid to inspire them to victory over Somerset at the Swalec Stadium.

The Welsh county are currently leading their group with three wins from three against Worcestershire and Warwickshire (twice).

"I think the record crowd is around 9,000 so I'd like to see that beaten," said Glamorgan captain Marcus North.

"They can sing and chant and get stuck into the Somerset players."

North says that a big crowd would inspire in-form Glamorgan.

"There is no doubt we will get a lot of numbers and that will really give us and extra 10-15% I think," North added.

"It will lift the guys. You don't get a chance to play in front of many big crowds as domestic players very often so it will be a great experience for some of the guys.

"Back home [in Australia] with the Big Bash T20 competition we get a lot of sell-outs and the home crowd gives the home team such an advantage."

North says there is a lot of confidence in the Glamorgan camp going into the Somerset, who are also unbeaten in the competition, having won both of their matches.

"The guys are in a very good place. When you get a couple of wins early it breeds a lot of confidence.

"There's still a lot of cricket to be played in this competition.

"It takes you six or seven wins, I think, that gets you into the quarter-finals, but we are still a long way off."

Glamorgan last reached the T20 quarter-finals in 2008 when they lost to Durham.

They have only got to the T20 Finals Day once, losing in the semi-finals to Leicestershire at Edgbaston in 2004.

There will be live commentary of this game on BBC Radio Wales AM & online from its 18:30 BST start.