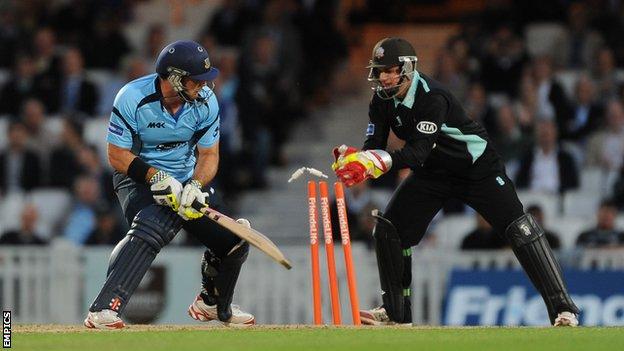 Sussex cricket manager Mark Robinson says the fine margins of Twenty20 cricket are to blame for their slow start in the FL t20 tournament.

The Sharks have lost three of their first four matches - with each being a final-over defeat - in the South Group.

He told BBC Sussex: "In Twenty20 you are either a hero or a villain.

We have set three games up to win. We have got ourselves into fantastic positions but we haven't got over the line

"One or two things have conspired against us for definite and to lose all three games in a heartbreaking way in the last over hits you hard."

Sussex have been beaten by Surrey twice, by 10 runs in their opening game at Hove and by three runs at the Oval, and lost to 2012 winners Hampshire by five wickets last Friday.

"Whenever you lose you can look at what you did wrong," Robinson added.

"We have set three games up to win. We have got ourselves into fantastic positions but we haven't got over the line.

"Obviously we have made some mistakes and some decision-making hasn't been good."

Robinson says some criticism of his side, who have progressed through the group stage in five of the past six seasons, has been undue.

"I read one [report which said] 'another poor performance'," he said.

"We lost with one ball to go. That can't be that poor a performance.

"A poor performance is when you get beat by 100 runs or eight wickets or something like that, not in a thriller in the last over."

Robinson believes Sussex's nine-wicket win at Somerset this week, which put them the top of the County Championship, is a timely boost ahead of Friday's trip to Hampshire in the FL t20.

"It will help as it gives confidence and winning is a great thing," he said.

"It is a tough game at the Rose Bowl as obviously they have got momentum and confidence and it is a home game.

"But we go there with some big players and looking to win, as we always do."