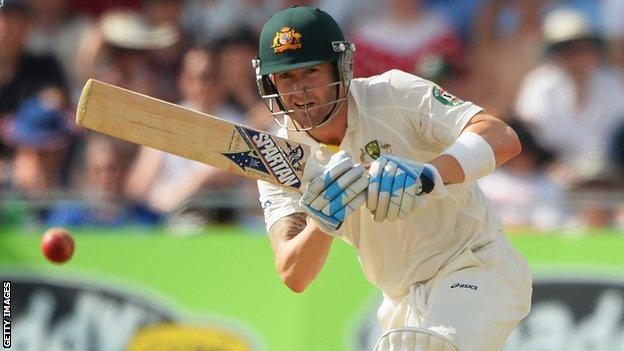 Put yourself in his shoes.

Your side have just lost one of the most dramatic Tests in recent memory by 14 runs, having fought back from a position of almost no hope. Your contribution with the bat was a duck in the first innings and 23 runs in the second. You wasted one of your team's reviews, one of seven decisions Australia wrongly referred in a game in which the use of technology was decisive.

Yet, as Michael Clarke is being quizzed in front of the TV cameras in the immediate aftermath of an agonisingly painful defeat, he still manages to poke fun at his own poor judgement.

"I've learned I need to use my reviews better," he says with a grin.

It is a measure of the player that he was able to find amusement from his own decision-making when pointing the finger of blame at a certain England batsman, the officials or technology - or all three - would have been much easier.

The way Clarke carries himself is just one of the factors that have persuaded many seasoned observers to describe him as the best captain in world cricket.

Clarke is the totem of this Australia team, and one upon whom they must lean heavily if they are to fight back from 1-0 down to win the Ashes.

It was not always thus. Two-and-a-half years ago, shortly before Clarke was appointed as Ricky Ponting's successor, a newspaper survey revealed that only 15% of readers wanted him to captain Australia.

"He copped a really bad press," added Chappell, who played 75 Tests for Australia from 1964-1980 and never lost a series as captain.

"As well as not being universally thought of as an Australian captain by the public, I don't think he was that popular amongst the players either."

Mistrust - dislike, even - seemingly stemmed from Clarke's flashy reputation, which was evident at the very early stages of his career.

Former Australia team-mate Justin Langer said: "I remember playing for Western Australia in one of his first games for New South Wales and he managed to wind up our captain, Tom Moody, because of his bleached blonde hair and cockiness. He was always a bit brash as a youngster."

His ability, though, was never in question.

"He was an extraordinary talent," said Russel Grimson, who has known Clarke since the age of nine and captained and coached him at Western Suburbs in Sydney.

"Originally he was a chinaman bowler; he made his first-grade debut as a spinner and batted at eight or nine.

"He was very competitive at everything he did. He was always up for a challenge and he would always give it his all."

Having been a member of the Australia youth sides, Clarke took the seismic step from promising state player to global star when he hit a sparkling 151 on Test debut in India in 2004.

Despite becoming a key part of an Australia team that can lay claim to being the best the game has seen, Clarke's earring, tattoos, sports car, model girlfriend and underwear adverts meant he struggled to rid himself of the 'playboy' tag.

It did not sit easily with an Australian public whose cricketing heroes - Allan Border, Steve Waugh, Ricky Ponting - were hewn from altogether sterner stuff.

Those who know Clarke best insist the perception is wrong.

"The way he was seen, as being involved in high society and lifestyle, wasn't fair," said Grimson.

Langer added: "People talk about the fancy cars and flash lifestyle, but I always see him in tracksuit pants and T-shirt. There's nothing that fancy about Michael Clarke.

"He's a good bloke. He's very close to his family and loyal to his friends, and those are pretty good traits."

Perhaps the incident which turned public opinion against him most strongly was a dressing-room altercation with team-mate Simon Katich after the 2009 Sydney Test against South Africa.

Clarke reportedly wanted to leave early to attend a function before the team's victory song. Katich took exception and had Clarke by the throat before the players had to be separated.

"He came into an experienced, successful side and he did get pulled into line. He was shown how to behave as an Australia cricketer," revealed Langer, who played 105 Tests and retired in 2007 as Australia's sixth most prolific batsman.

Clarke's return home early from the 2010 tour of New Zealand for personal reasons - he and model Lara Bingle called off their engagement shortly after - was used as further ammunition by his doubters.

These incidents may go a considerable way to explaining why Clarke's appointment as captain in 2011 was far from universally applauded, despite his having served as Ponting's deputy for three years.

On behalf of the Australian sports media and cricket fans, it's time to officially say sorry. The past two years, you have proven you have more strength of character and toughness than any of us mere mortals could ever hope to have

Clarke's response to his promotion was emphatic. He made a hundred in three of the next four Tests, before embarking on a run of form in 2012 which beggared belief.

He plundered a triple century, three doubles and a plain old hundred in a year that saw him amass 1,595 Test runs at a Bradman-esque average of 106.33.

As the runs flowed, so the Australian mood softened, and the newspaper that had opposed his appointment so vehemently even went as far as to publish an apology.

"He won the hearts of people in Australia," said Langer. "The great captains lead by example and he has done that."

Not only had Clarke established himself as the leading batsman in the world, but he was being heralded as a captain beyond compare.

"He has got a brilliant strategic mind," added Langer, who played alongside Clarke before working with him in his role as Australia assistant coach.

"The way he thinks about the game is amazing. He's a cricket tragic, which is always a good thing."

For Chappell, it is Clarke's attitude as much as his tactical nous which makes him so good.

"As soon as Michael Clarke's team walk on to the field, they're trying to win the game," he said.

"It's very rare. He's a standout among the current captains."

Clarke's participation in the first Test was put in doubt by a longstanding back injury, and life without him at Lord's - or any of the other remaining Tests - is too worrying to contemplate, according to Chappell.

He said: "You saw in India what our leadership succession is - it's Michael Clarke and then daylight. There's a leadership vacuum; it's Mother Hubbard's cupboard."

If anything, Clarke's mediocre contribution with the bat at Trent Bridge underlined his importance to an Australia side that twice collapsed in the first match of the series.

So what chance a return to form when the second Test at Lord's starts on Thursday?

"I've not seen anyone work harder on his game than Michael," said Grimson.

"There is no more dedicated, focused and committed cricketer in the world," said Langer.