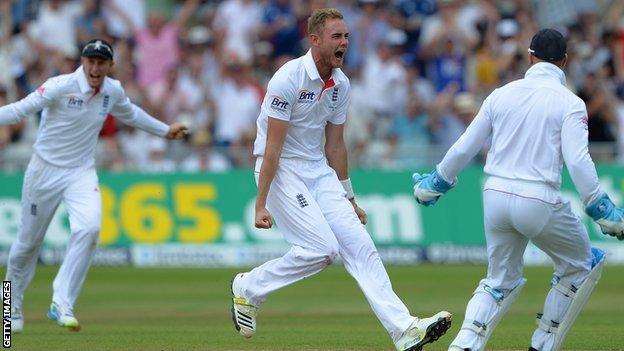 After being caught up in controversy on Friday over his decision not to walk, England's Stuart Broad reminded everyone on Saturday what a combative cricketer he is.

He looked confident with the bat as he completed his first half-century in 24 Test innings, and took two vital Australian wickets to help reduce the tourists to 174-6, a position from which England should go on to win the first Ashes Test.

"England should win - it's going to take a miracle for Australia. Ashton Agar has to play even better than he did in the first innings and I don't think it's going to happen. England have put a lot into it and they were tired at the end. There was a point in the afternoon where they were worried. I don't think they bowled badly - the pitch is just so slow that if you wait for it, you can get runs."

I'm sure he would have been lifted by the tremendous cheer he received from the Trent Bridge crowd when he walked out to bat with Ian Bell on his home ground and it was great to see him standing up and driving the Australian fast bowlers.

He also bowled very well, starving the Australians of runs and getting the ball to reverse swing on an abrasive surface.

Since I expressed my view in Friday's column that Stuart should have walked when his edge to slip was not spotted by umpire Aleem Dar, I've had several conversations with people on Twitter, some of whom support my view and others who support Stuart.

People are now asking me what the difference is between Broad's decision to stand his ground and Michael Clarke's decision not to walk when he was caught behind by Matt Prior off Broad's bowling in Saturday's evening session.

Clarke has said publicly that he did not think he hit it and I will leave it to those people to call the Australian captain a liar.

It would also seem very odd for Clarke to waste Australia's only remaining review if he knew it was going to show he was out.

Although Broad and Graeme Swann were England's two more successful bowlers in terms of wickets on Saturday, James Anderson once again underlined his brilliance with a superbly disguised slower ball to dismiss Chris Rogers.

He is always trying new things and pushing new boundaries and here was another example of a player who is at the peak of his powers.

Overall, England have shown how much better they are at reverse-swing bowling than Australia. Not only do they get it to swing earlier, they also generate so much more swing in both directions.

You can see from the condition of the ball that one side is very, very shiny and the other has been allowed to wear, and great care is taken not to allow any moisture to touch the dry side. But it is one thing to have a ball that reverses and another to be able to bowl it.

The one England bowler who was not at his best on Saturday was Steven Finn. The Middlesex fast bowler has been short of his top form all summer following the issues with his run-up that surfaced in New Zealand.

The fact that he had to wait until the 29th over to join the attack in Australia's second innings suggests captain Alastair Cook does not have a huge amount of confidence in him at the moment.

He did return to bowl a good second spell, which was a timely reminder of what he can do, but I would think he will have to demonstrate on Sunday and in the nets that he has his rhythm and form back if he is to keep Tim Bresnan out of the side at Lord's.

After being set an improbable 311 to win, Australia will be disappointed to have let a good start slip away with three quick wickets in the final session.

They do, however, have a long tail and if Brad Haddin and Ashton Agar can see out the first hour on Sunday, England could start to get a bit anxious.