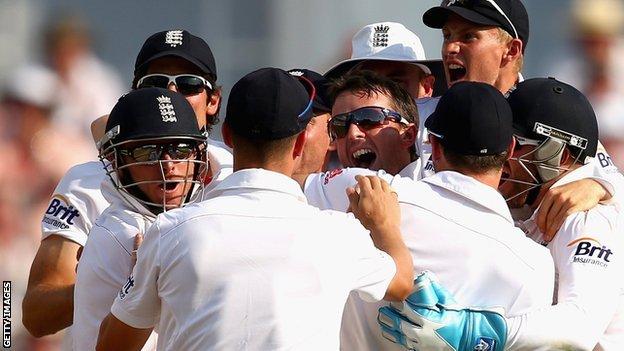 Chasing a target of 311, a record score to win a Trent Bridge Test, Australia were going well on 161-3.

But in a potentially decisive twist in the final hour, England removed captain Michael Clarke, Steven Smith and Phil Hughes in the space of 18 balls to reduce the tourists to 174-6 at the close, still 137 runs adrift of the finish line.

England had earlier added 49 runs to their overnight total to post 375 all out, with Ian Bell completing his 18th Test century and Stuart Broad scoring 65.

Broad, the subject of a major controversy over his followed up with an impressive display with the ball, breaking Australia's 84-run opening partnership and removing Clarke for 23 in the closing stages of a sweltering day in which England had toiled for long stretches without reward.

Pitching the ball up to Clarke, Broad drew a faint edge from the Australia captain and wheeled away in celebration as Matt Prior took the catch.

The festivities were put on hold as the umpires verified that the ball had carried into Prior's gloves and were delayed still further when Clarke called for a review. But when Hot Spot showed the smallest of marks on his bat, the skipper had to go.

The dismissal of Australia's leading batsman marked a total shift in the momentum of the match as Smith was trapped right in front of his stumps by Graeme Swann, who had previously bowled 22 wicketless overs.

Two overs later, Australia were six wickets down as Hughes - who scored an unbeaten 81 in the first innings - was struck on the back pad after missing a spinning delivery from Swann and given out on review.

"After being caught up in controversy yesterday over his decision not to walk, England's Stuart Broad reminded everyone on Saturday what a combative cricketer he is."

The experienced Brad Haddin and debutant Ashton Agar - promoted to number eight after his first-innings 98 at the foot of the order - survived until the close, but with so many runs still required England must be firm favourites to go 1-0 up in the series when play resumes on Sunday.

Australia, who have only once - in 1948 - successfully chased more than 250 to win in England, made the ideal start with the bat as openers Shane Watson and Chris Rogers put on 84 in 24 overs either side of lunch.

On a sluggish pitch, they deployed the method that had worked so well for Bell, refusing to force the issue but instead playing very late, scoring lots of runs through third man and taking singles wherever possible.

Watson always looked the more likely to lose his wicket and so it turned out as he was lbw to Broad for 46 after playing across his front pad.

Ed Cowan walked out on a king pair and took 16 balls to get off the mark before cutting Steven Finn - who was not introduced until the 29th over of the innings - for four.

But England made another breakthrough on the stroke of tea as Cowan attempted an expansive drive at part-time off-spinner Joe Root and got a thick edge to slip.

Rogers, who successfully overturned an lbw dismissal on 38, had just completed his first Test fifty when he clipped James Anderson straight to Bell at midwicket.

A delighted England bowling coach David Saker ran out to the team balcony to applaud the dismissal and was given a thumbs up by Anderson, suggesting Rogers had fallen for a plan hatched in the England dressing-room over tea.

With the in-form Smith joining Clarke at the crease to add 37 runs for the fourth wicket, the game remained firmly in the balance, only for Broad and Swann to turn the tide England's way.

Earlier, Broad advanced to his highest Ashes score before James Pattinson located the edge of his bat and Bell collected the five runs needed to bring up his first hundred against Australia in England, a landmark celebrated with a leap and purposeful punch at the air.

He made nine more runs before feathering a ball shaping away from him from Mitchell Starc through to the keeper as England lost their last three wickets for the addition of just four runs.

484 comments
Back to top
unknown