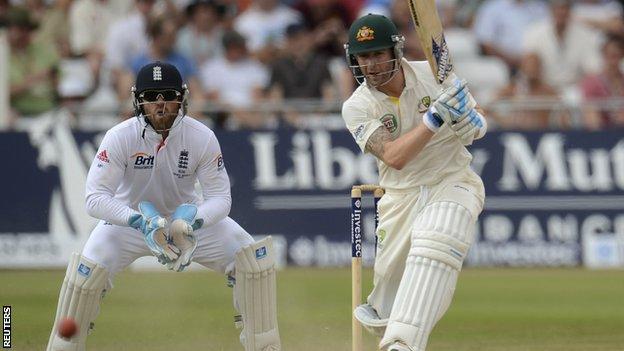 Australia captain Michael Clarke insists his side can still win a thrilling first Ashes Test despite three late wickets on Saturday that appeared to put England in charge.

The visitors, who ended the fourth day on 174-6, will begin Sunday's fifth and final day needing a further 137 to pull off a record chase at Trent Bridge.

No side has chased down more than 284 in the fourth innings to win a Test at the Nottinghamshire ground, but Clarke remains bullish despite his side's predicament.

"We're still a fair way away but I think the way we've seen this game, the rollercoaster of Test cricket going up and down for the past four days, anything is possible," he said.

"I won't be surprised if come tomorrow we don't lose a wicket and we win the game just after lunch."

Clarke was dismissed for just 23 as Australia slumped from 161-3 to 164-6 in the final hour of a relentlessly tense day, leaving teenage debutant Ashton Agar and vice-captain Brad Haddin battling on a pitch offering significant turn.

He said: "We would like to have a few more wickets in hand, but I'm still really confident that we have a chance of winning this Test match.

"You never know what is going to happen in this game. We need Ashton to play the type of innings he played in the first dig. Brad Haddin looks solid too.

"We need to start well in the morning and think positively. We have some batting to do and if we do it well, we can win this Test match."

Earlier in the day, Ian Bell had completed his 17th Test century as England pushed their innings out to 375, leaving the tourists needing a formidable 311 to win.

Bell was part of the England side that won by just two runs at Edgbaston in 2005 after Australia resumed on the final day on 175-8 in pursuit of 282.

"I've played too much Ashes cricket to know not to take anything for granted," Bell said.

"(That game) was my home ground, a game I'll never forget, but hopefully it doesn't go that tight tomorrow."