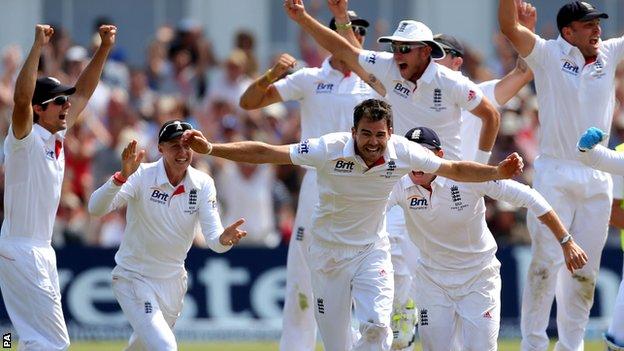 James Anderson was England's final-day hero as the hosts held their nerve to complete an astonishing 14-run victory over Australia in an unforgettable climax to the opening Ashes Test.

Amid unbearable tension, Australia's final pair of Brad Haddin and James Pattinson took the tourists to the brink of victory with a partnership of 65.

"James Anderson is head and shoulders above every other seam bowler in this series and England would not be anywhere near the same force without him. He really is very special and as a former swing bowler myself I can't help but sit there in absolute admiration of what he does. His every ball is a challenge for the batsman. With metronomic accuracy, he bowls orthodox swing and reverse swing, cutters and slower balls.

But when Haddin was caught behind off Anderson for 71 via the thinnest of inside edges - and given out following a painstaking review - England could celebrate one of the closest wins in Ashes history.

It was Anderson's fourth wicket of the day, fifth of the innings and 10th of the contest, earning him the man-of-the-match award.

The victory, which for sheer drama almost matched their incredible two-run triumph in the 2005 Edgbaston Ashes Test, puts England 1-0 up in the five-match series going into the second Test at Lord's, which begins on Thursday.

This time Australia started the day needing a further 137 runs to win with four wickets in hand and when Anderson removed Ashton Agar, Mitchell Starc and Peter Siddle - all caught at slip by Alastair Cook - England looked certain to win.

But that was to discount the abilities of Haddin and Pattinson, a tail-ender with a highly respectable Test average of 28.77 from 14 innings going into the match.

The departure of Anderson from the attack after 13 consecutive overs presented them with an opening and they took full advantage as Haddin cracked three consecutive fours off the bowling of an off-colour Steven Finn, whose two overs cost 24 runs.

James Anderson has now taken two 10-wicket match hauls in Test cricket - and both have been at Trent Bridge. He has also claimed six of his 15 five-wicket Test innings hauls in Nottingham.

Brad Haddin and James Pattinson's stand of 65 was the highest last-wicket partnership in the fourth Test innings played in England.

Australia also set a new record for the most aggregate 10th-wicket runs across both innings of a Test. The Aussies set the previous best of 189 in 1924.

Pattinson nonchalantly lofted Graeme Swann over mid-off for six and suddenly Australia were within 31 runs of their target.

There followed a frenetic period before a delayed lunch interval as Haddin was dropped at deep square leg by Finn, almost run out by Jonny Bairstow and very nearly played Swann onto his own stumps.

Lunch was eventually taken with Australia only 20 short of victory, giving Anderson 40 minutes to shake off the cramp that had forced him off the field in the latter stages of the previous session.

And the England seamer returned to strike the decisive blow in his second over as Haddin drove away from his body and Prior claimed a catch behind.

When umpire Aleem Dar declined to raise his finger, Cook sent for a review. As replays on the stadium screens revealed a faint Hot Spot mark on Haddin's bat, the festivities could begin.

This was the Test match that had everything. It was insufferably tense, relentlessly captivating, wonderful to witness yet at the same time as close to mental torture as sport can come.

The final wicket released the valve on the pressure that had been building since the start of the day as Australia's seventh-wicket pair survived the first 55 of minutes of play to add 31 runs.

England needed a catalyst and they found one in the shape of the new ball, which Anderson sent down with extra pace to induce a nick from Agar, which Cook snaffled sharply at first slip.

Starc survived just five balls before nicking off for one, and Siddle added 11 before he too edged Anderson towards the slip cordon where Cook dived to his right to take a brilliant two-handed catch.

With 80 runs still needed and just one wicket in hand, England were on the home straight, only for Haddin and Pattinson to give them an almighty scare.

Sunday's drama provided a fitting finale to a Test match which captivated its audience from the start as the balance of power shifted from one team to the other.

England were bundled out for 215 on the first day but looked on course for a healthy first-innings lead when they reduced Australia to 117-9.

Agar, however, saw things differently. The 19-year-old's fearless 98 off 101 balls in a last-wicket partnership of 163 with Phil Hughes was the highest score by a number 11 in Test history and catapulted Australia to 280.

At 174-5 in their second innings England were in considerable danger, but a tenacious hundred from Ian Bell in a partnership of 138 with Stuart Broad - whose decision not to walk on Friday was one of many controversies - dragged the match away from Australia.

Still the Aussies fought though, and it was not until deep into the final session of day four that England took control as they followed the wicket of captain Michael Clarke with two more quick scalps to make themselves firm favourites going into Sunday's finale.