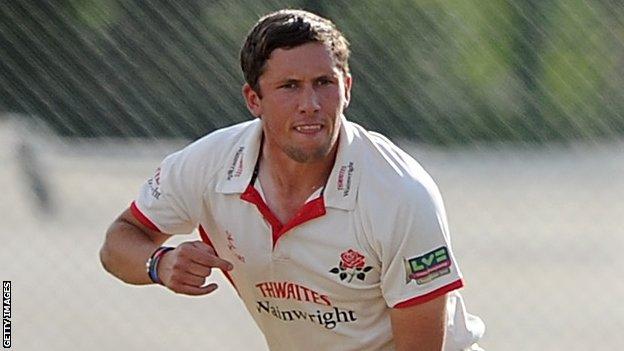 Murray Goodwin and Simon Kerrigan shared the honours on another good day for batting in Lancashire's game against Glamorgan at Old Trafford.

Goodwin added 56 to his overnight score before being caught at square leg off Kerrigan for 194.

The spinner sent down 49.1 overs in total for figures of 7-162 as the Welsh county were eventually all out for 474.

The Glamorgan attack also struggled to find any help from the pitch as the home side replied with 93-0 at stumps.

New Zealand off-spinner Nathan McCullum, drafted into the Glamorgan side in the absence of Marcus North, sent down 11 tidy overs, but was unable to separate Karl Brown and Luis Reece, who ended day two on 48 and 42 not out respectively.

Earlier, Kerrigan was rewarded for his persistence on an unresponsive surface, although the ball that brought about the downfall of Goodwin was not his best, a long hop which the former Zimbabwe Test player hit to Andrea Agathangelou.

The seven-wicket haul was the left-armer's second in five days and is the top spinner in the County Championship's two divisions with 39 dismissals in nine matches.

"Lancashire produced an excellent fightback after lunch, led by spinner Simon Kerrigan, who took seven wickets in an innings for the second successive game.

"He has more wickets that any other spinner in the country this season and you cannot help but speculate that he might yet have a role to play for England in the Ashes this summer, if they elect to name two spinners for the Old Trafford Test.

"Murray Goodwin deserved to go on and reach his double century, but despite falling six runs short he helped to bat Glamorgan into a commanding position and Lancashire know they need to bat long into the third day to eliminate any threat of defeat."