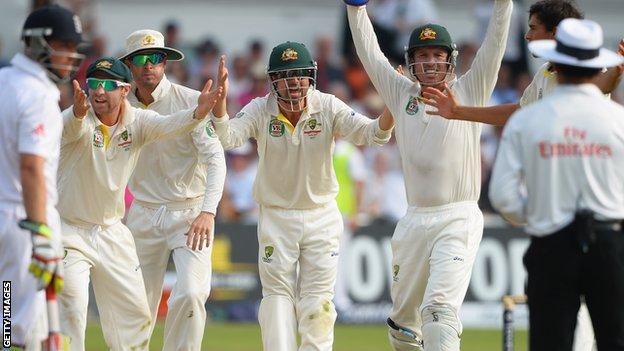 There has been much talk about "the spirit of the game" since the first Ashes Test at Trent Bridge.

But does it not seem odd to believe that cricket should be governed by a spirit when we have algorithms and thermal imaging and all manner of cutting edge gadgets to make things less mysterious?

One exchange between former England spinner Phil Tufnell and an exasperated BBC Radio listener highlighted the fault line the introduction of technology has opened up in the sport.

Tufnell: "By the laws of the game, you stand there until given out."

Listener (with a deep, troubled sigh): "I'm older than you guys and I was brought up so that if you hit the ball, you walked."

Tufnell was perhaps too polite to point out - this is still cricket, after all - that if Hawk-Eye and Hot Spot had existed in the listener's formative years, batsmen at all levels of the game would probably have been wedded to their creases like limpets, just as they tend to be today.

This is one of the problems with attempting to transpose modern attitudes and mores into historical situations.

Indeed, it should be noted that an awful lot of callers to Tufnell and Michael Vaughan's 6-Duck-6 show on BBC Radio 5 live were vociferous in their criticism of Broad and DRS.

"It should be written in the rules that no batsman walks," argued Tufnell. "Then we wouldn't have this debate. It wouldn't be about the morals of the player, it would be in the umpires' hands. It calls into question the character of players and doesn't take into account the situation and the pressure they're under."

As well as a scientific age, we live in a professional age. So when Stuart Broad was vilified for failing to walk during England's second innings in Nottingham, how many of those who vilified him placed themselves in his shoes and remembered what was at stake?

"If you walked off with one run to win the Ashes," said Tufnell, "your team-mates wouldn't talk to you."

Still, there were plenty more dissenting voices. Jonathan Agnew, the BBC cricket correspondent, wrote on these pages: "There is nothing within the laws of cricket that says Broad had to depart. But when he chose not to, it became an issue for the spirit of the game."

Agnew's irritation was more to do with the blatant nature of Broad's decision not to walk than the decision itself. "How does it affect the relationship between the teams?" said Agnew. "If you decide to stay, you decide to accept the consequences. You must accept all the abuse that comes your way."

Just as when Dilruwan Perera was abused by Broad's team-mate Graham Swann during last year's England tour of Sri Lanka, during a warm-up game in which DRS was not available.

"It was very difficult to take because it was so blatantly out," said Swann. "He opened himself up to the level of abuse that was coming to him. It was just cheating in my view but we live in an age where cheating is accepted." Oh, the irony.

While the Australian team - and coach Darren Lehman up on the balcony - was clearly irritated by Broad's decision to stand his ground, it was hardly a surprise that they refused to condemn him publicly.

After all, there is a saying that an Australian batsman will only walk if there are no stumps standing, which is why former England batsman Geoffrey Boycott found the Broad situation so absurd.

"The rules say that it's 'in the opinion of the umpire' so it's above things like 'the spirit of the game'," said Boycott. "I don't see bowlers asking you back when the ball is sliding down leg."

"Broad shouldn't have walked," agreed former Australia batsman Damien Martyn. "We get told as kids and when playing for Australia that the umpire is there to make a decision - and they should."

Added Adam Gilchrist, who prided himself on being a rare Aussie batsman who got on his toes when he thought he had nicked one: "People told me I was actually disrespecting the umpire by walking."

Which is why the wrath of Australia's players was directed at umpire Aleem Dar, who somehow missed Broad's monstrous snick, rather than the batsman himself. Indeed, most of the controversy at Trent Bridge had less to do with DRS itself, than the application of it - by both officials and captains.

DRS was introduced because there was a gradual acceptance that umpires needed help. Trialled in the Test series between Sri Lanka and India in 2008, it was officially rolled out by the International Cricket Council for the first Test between New Zealand and Pakistan in Dunedin in November 2009.

Because of an ICC rule stating that teams must mutually agree on the use of DRS outside of ICC-run events, India decided to opt out. The official reason given by the Indian cricket board was that the array of technology required was too expensive for a system its players considered fallible.

Their principal gripe was with the ball-tracking technology, which they claimed could not predict a ball's trajectory after pitching. "I endorse any technology that is close to being 100%," said Indian batting legend Sachin Tendulkar only last month. "I have an issue with half-baked technologies."

Indian newspapers have seized on the Trent Bridge Test as proof that their hero was right all along. But ICC investigations have revealed that 'correct' decisions have jumped from 93% to 98% since DRS was introduced.

Indeed, of the so-called controversial reviews in Nottingham, DRS technology was at fault only once, when third umpire Marais Erasmus overturned Dar's on-field decision not to give England's Jonathan Trott out lbw because Hot Spot was out of commission.

But even that appeared, in the final reckoning, to be human error because the naked eye suggested Trott got an inside edge.

Australian batsmen Shane Watson and Michael Clarke were both given out on review, with DRS vindicating the umpire on both occasions. And in the case of the final wicket of the match, Brad Haddin's feathered inside edge that handed England victory by 14 runs, DRS proved umpire Dar wrong.

In total, there were 13 reviews in Nottingham: five were upheld, eight were turned down. England skipper Alastair Cook nailed three out of four, Aussie skipper Clarke two out of nine. Which is Clarke's problem, not that of DRS.

"I'm not happy with my use," said Clarke, who used up two unsuccessful appeals before the Broad incident, including a nonsensical one when James Pattinson thought he had Jonny Bairstow trapped lbw when the ball was missing the stumps by a couple of feet. "England have used it better than I have."

All international skippers, and all cricket fans, must now appreciate that the art of captaincy involves judicious reviewing as well as imaginative field setting, bowling strategy and the maintenance of a harmonious team.

But not only was Cook more judicious than Clarke, you could also argue he adhered closer to the 'spirit of the game': while Clarke was effectively taking a punt that the technology might not be up to the task, Cook was using it wisely and reaping the benefits.

"There are those who say that the Decision Review System was designed to eliminate howlers like this," added Agnew. "Clarke, having used up his second review on a spurious lbw appeal earlier in the day, had none left when the Broad incident happened.

"I believe that each team should only have one review per innings. Why? Precisely so you don't use it as Clarke did, as a gamble. It should not be a tactic but a last resort. We do not want to see reviews used as a speculation."

Others are worried that umpires, scrutinised as never before by huge crowds in the ground and millions more on television, are also becoming more tactical in their use of DRS.

"When Haddin was out," said Tufnell, "I reckon Aleem Dar went: 'Hold on a minute, I'm not going to commit here because I might be unsure - I hope England review it and they get the right decision in the end.'"

DRS can and will be tightened up in time. The Snickometer, which analyses audio and video to reveal whether a ball has taken the edge of a bat, is currently not part of the DRS package because it is too slow. But its designers are hopeful they will soon be able to turn around a 'snicko' in as little as five seconds.

And it seems unfair to dock marginal lbws - such as Watson's in Australia's second innings, when he was given out by Dar only for the subsequent referral to reveal the ball would have clipped leg stump - from a side's stock of reviews.

Any review system will bring with it cynicism. But the price we pay for professionalism is cynicism, in any walk of life. And any review system will have some complaining that it dilutes the drama and takes away from the spontaneity, as with the fall of Haddin's wicket.

But perhaps it is better to be cynical, deliberate and correct than to be ruled by spontaneity and spirits and be wrong. Let the arguments continue.