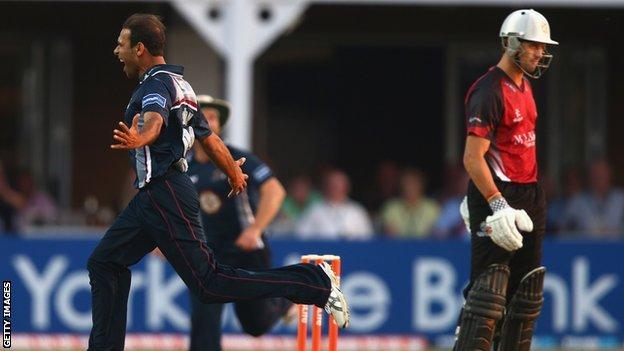 Steven Crook hit a fine 63 for Northants after Kyle Coetzer's 34 had given them a good start.

Craig Kieswetter (38) and Jos Buttler (37) kept Somerset in it but Azharullah sealed a win which put them top of the FLt20 Midlands, Wales & West group.

There was a dramatic start to the visitors' innings when captain Marcus Trescothick injured his ankle taking a run off the first ball.

After a delay for treatment he continued with Buttler as his runner and went on to make 22.

When Buttler returned for his own innings he gave Somerset hope, but once he was run out in the 19th over the margin proved too much and Northants earned their first-ever home win over their visitors in the competition.