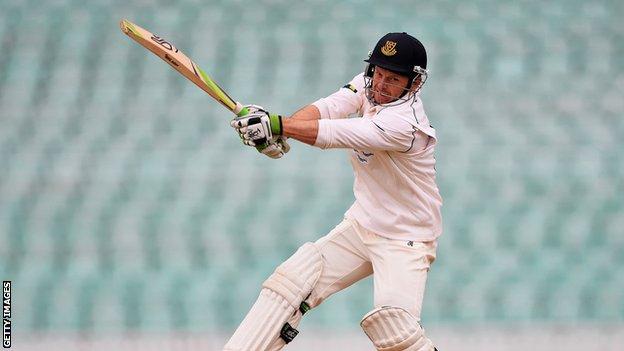 Middlesex ended day one of their Division One match against Sussex at Hove in a strong position, despite a century from home skipper Ed Joyce.

Joyce (101) and opener Chris Nash (40) provided the only resistance as the hosts slumped to 229 all out.

Gareth Berg (3-49) was the pick of the Middlesex bowlers, while Neil Dexter, Tim Murtagh and Gurjit Sandhu took two wickets apiece for the visitors.

Sam Robson and Dawid Malan negotiated the final 13 overs to close on 44-0.

Ireland international Joyce, playing against his former county, reached his second Championship century of the season from 162 balls, his innings containing 13 fours and one six.

His was the ninth wicket to fall as he became a second victim of the day for Middlesex captain Dexter (2-14).

"Middlesex looked back to their best in the Championship as only a century from Ed Joyce prevented a complete Sussex collapse.

"Having been put in, the hosts reached 48 without loss but were pegged back when the visitors managed to find a more consistent line and length on a green but pacey track.

"Despite seeing through a tricky 13 overs to the close, the Middlesex batsmen will surely be given a similarly tough working over by the Sussex attack, led by the dangerous Steve Magoffin, on day two."