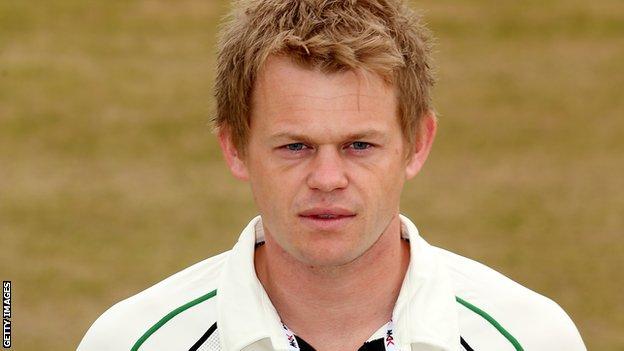 Bowler Cessford, 29, has taken a career break from the RAF in order to try to make the grade at first-class level.

And Wednesday's Championship match against Gloucestershire at Cheltenham could provide his first opportunity.

"He's bowled pretty well in the leagues and in the second team recently and he's got a bit of pace," Rhodes said.

"If he plays, it'll be an opportunity for him to show us what he can do.

"We need to find out just how good Cess is and he's going to have a good chance to do that if he plays," he told BBC Hereford & Worcester.

Cessford has the RAF's Elite Athlete Status, which allows him to move to New Road before returning to service when his contract expires at the end of the season

Cessford has been brought into the squad in place of Chris Russell, and Joe Leach is preferred to Oxford University player Tom Fell.

Rhodes said that for the first time in a number of years there was genuine competition for places at New Road.

And he believes strength in depth can only bode well for the future as Worcestershire have a good clutch of young players, who are all hungry to succeed.

"With the likes of Tom Fell joining us from university and then playing so well against the Australians and also in the one-dayer at Northampton - that's tremendous," he said.

"He's a youngster who's come in and who has stood up and yet at the moment he's not playing in the side.

"That means there are a couple of decent players in the second team who will definitely keep the first team players on their toes."