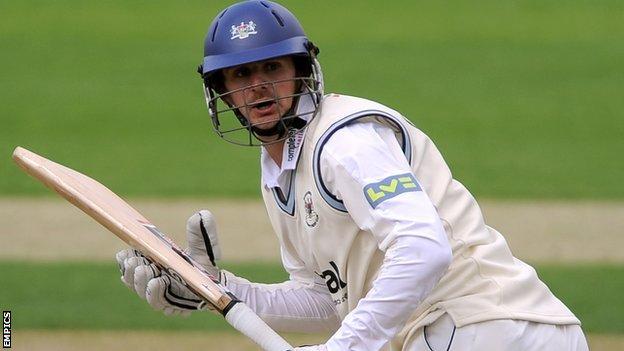 A century partnership between Alex Gidman and Gareth Roderick helped Gloucestershire build a decent lead on day two against Worcestershire.

Opener Chris Dent continued to build on his overnight 56 early on, adding 23 more before falling at 129-2.

The hosts were all out for 326, while Worcestershire closed on 31-0.

The last four Gloucestershire wickets fell for just 25 runs as the tail provided little resistance to the visiting attack.

Meanwhile it was a day to remember for Worcestershire pacemen Graeme Cessford, who took his first County Championship wickets in Hamish Marshall and Craig Miles on his debut at the age of 29, having taken a year's break from the RAF to pursue a cricket career.

However his side are still 113 runs in arrears heading into day three at Cheltenham.

"Gloucestershire will be irritated they are not in a stronger position with two days remaining. They were only 2 wickets down when passing Worcestershire's first innings total, and it was a surprise when Alex Gidman and Gareth Roderick both perished in quick succession."

"The lead, at 144, was useful, but losing the last six wickets for 64 pulled Worcestershire back into the game, with Gareth Andrew mopping up the tail."

"Worcestershire successfully negotiated the last hour. They'll hope to be level by lunch on Friday, and with enough batting left to set Gloucestershire a tricky total to win."

"Worcestershire clawed their way back into the game, but will know they have a lot to do to set up a defendable total in the fourth innings.

"Gareth Andrew and Graeme Cessford, the latter looking a far better bowler than on the first day, ripped through the Gloucestershire tail after Alex Gidman and Roderick appeared to have them in a good position.

"Fun moment of the day was when Alan Richardson's nephew Josh Robshaw came on to field for Worcestershire, not his grandson as some suggested."