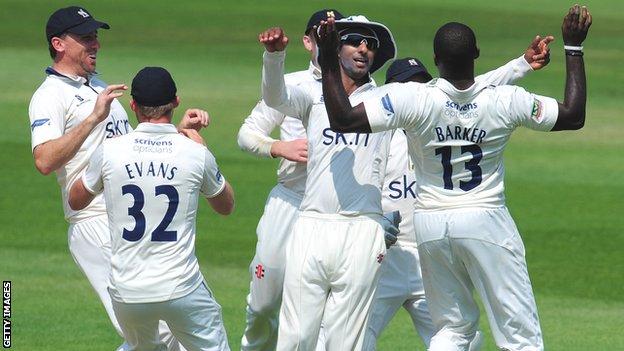 Warwickshire kept alive their hopes of retaining the Championship with a 216-run victory over Nottinghamshire.

Off-spinner Jeetan Patel finished with match figures of 8-128 on a slow pitch.

Alex Hales (58), who has been out of form in first-class cricket, made his first half-century since April, but the visitors stumbled from 154-3 to 155-6.

Only Samit Patel (36) and David Hussey (33) provided any other resistance and Notts lost their last six wickets for 56 to be bowled out for 210.

His 15 dismissals in successive victories over Middlesex and Notts have put the champions within range of the current leaders Sussex.

But his namesake Samit could be facing disciplinary action for a negative reaction to his dismissal by Rikki Clarke.

Given out by Trevor Jesty when William Porterfield dived to claim a catch at square leg, the batsman showed dissent in a reluctance to leave the pitch, a shake of the head and a swish of his bat.