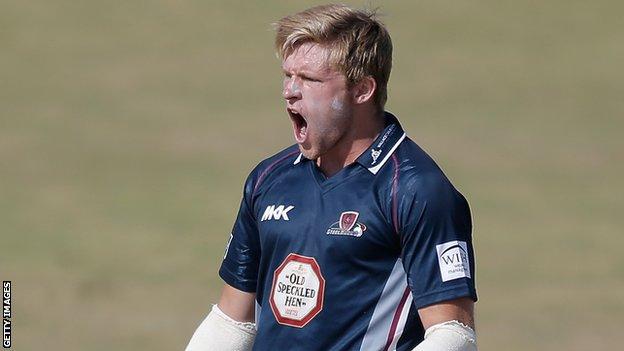 Their 10-run victory over Somerset on Wednesday made it five wins out of six and put them top of the Midlands, Wales & West group table.

Willey told BBC Radio Northampton: "I think we can go all the way. You see how we've played tonight with not enough runs on the board.

"We have players who can do everything and it'll get us a long way."

He added: "We knew it would take something pretty special [against Somerset].

"They got off to a flier and I bowled a bit of a shocking over which put them on the front foot. But the guys held their nerve and got the balls in the right area. It was a special day for us."

All-rounder Willey, the son of former England player Peter, hailed the efforts of their bowlers in defending their total of 150-8.

Mohammad Azharullah, who is observing Ramadan, took 3-16 in his four overs. He has taken 15 wickets at 11.53 to top the T20 bowling rankings.

And Steven Crook, who scored 63 in the Steelbacks' innings, says the club feels very different from the one he left in 2010.

"If we stick to what we're doing, we don't fear anyone," he said.

"This is a completely different club. There's a great atmosphere and [coaches] David Ripley and Phil Rowe have done a fantastic job of getting the guys together. It feels like a club that is going somewhere and it's great to be a part of it."