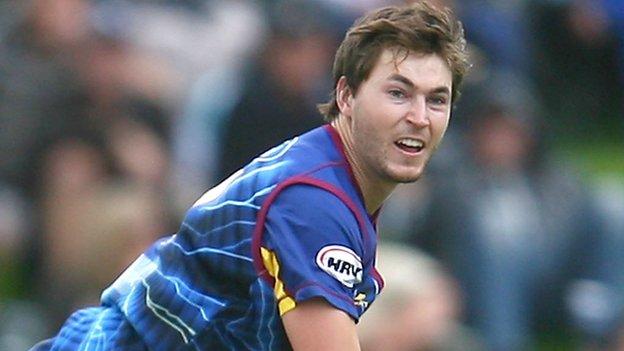 Gloucestershire paceman James Fuller has admitted he could not believe he had taken his first hat-trick.

The 23-year-old's feat came on day one of their Division Two Championship game against Worcestershire at Cheltenham.

Fuller dismissed Matt Pardoe in the final ball of the eighth over, before taking Moeen Ali and Alexei Kervezee with the first and second deliveries of the 10th.

"It feels a bit surreal to look back on it now," he told BBC Gloucestershire.

"I've had a few hat-trick opportunities and I've always gone for the big yorker.

Fuller is the 16th Gloucestershire player to take a hat-trick, and only the fourth to do it at Cheltenham

"But (team-mate) Hamish Marshall came out to me and said hat-tricks don't happen too often - you don't have to go chasing it.

"I just ran in and bowled a good ball and it nicked to Gareth [Roderick], and that was it."

The visitors were 22-6 but made a slight recovery to finish 182 all out, with Fuller claiming 5-43 from 19 overs, and Gloucestershire started day two on 83-0.

New Zealander Fuller added: "In ideal conditions, you've got to make the most of it and I think we did. With me, Will [Gidman] and Craig [Miles], our first spells were awesome.

"We built pressure and built it together which ultimately led them to being 22-6. They put on a bit of a partnership but we kept the pressure on and got the wickets in the end."