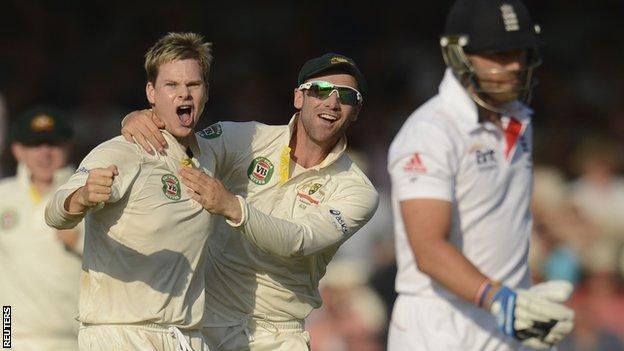 England centurion Ian Bell insists his side are in a good position despite three late wickets on the first day of the second Test.

Bell, who scored a brilliant 109 to replicate his match-winning knock in the first Test, was one of three victims for the part-time leg-spin of Steve Smith as England slumped from 271-4 to 289-7 at stumps.

"If the dry conditions stay we know we have quality bowlers who can bowl reverse swing and then later on spin will come into it," said Bell.

"We'll see as the game goes on what a good first-innings score is. It was disappointing to lose the three wickets at the end but not a bad day for us overall."

England began badly in front of a full house at headquarters, the recalled Ryan Harris removing Joe Root for six and Kevin Pietersen for two as the hosts slipped to 28-3 after winning the toss.

"Ian Bell played beautifully - he was like David Gower. You wonder how he can get out when he plays like that. This was an important knock but we don't know how important until Australia bat."

But Bell's superb innings, first in partnership with Jonathan Trott (58) and then in a fifth-wicket stand of 144 with Jonny Bairstow, dragged England back into contention on a sun-baked afternoon.

After his century at Trent Bridge and 115 in the fifth Test at Sydney in 2010-11, Bell joins Jack Hobbs, Walter Hammond and Chris Broad as the only Englishmen to score Ashes centuries in three successive matches.

He said: "It is absolutely incredible. It is a real honour to be with those kinds of names, and playing at Lord's as well it is a special place. When you do well here it is really special.

"Every time I go out I just want to go out and fight. An innings at a time is important for us as a team and for me as an individual.

"It is what I want to do as much as I can. I have done it a little bit over the last couple of years now, and it is nice to come out and do it again.

"Credit has got to go to Australia. Harris coming back into the team bowled really well, and Jonathan Trott and myself had to leave really well.

"You know Australia are just going to keep coming at you and you've never got enough.

"It was another great day of Test cricket. Coming from Trent Bridge, we had an amazing match there and it looks like we've got another one here at Lord's."

Australia paid dearly for Peter Siddle's no-ball when he bowled Bairstow for 21, and fellow paceman Harris believes it could prove to be an expensive mistake.

"There's no excuse for it. The line is there for a reason," said Harris.

"It's not acceptable. It cost us a lot of runs and potentially it could cost the Ashes.

"It was probably the only one he bowled, but funny how it happened to be a wicket. That's how the game works."