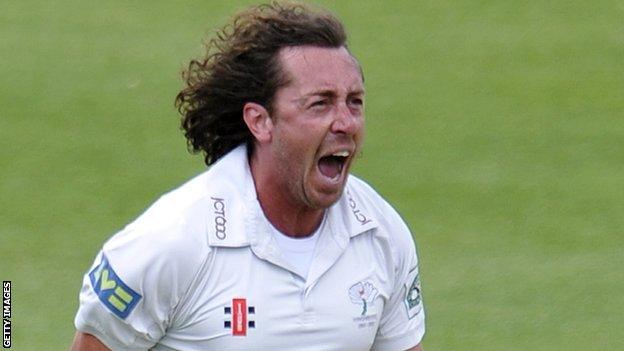 Yorkshire sealed victory within three days after Derbyshire were made to follow on at Chesterfield.

And after being made to bat again, Ryan Sidebottom and Steven Patterson claimed three wickets apiece to leave the visitors on the verge of victory.

Wayne Madsen put up a brave resistance but his dismissal for 141 saw the hosts all out for 269, 113 behind.

Yorkshire's pace attack had the hosts troubled at the beginning of their second innings at 38-4, however Madsen began to put in a captain's innings, and three consecutive fours took him to 50.

The right-hander dominated a 111-run partnership with Poynton (29) to give his side a chance of taking the match to a final day, before his partner was caught out to extra cover off Patterson (3-62).

From then on the outcome looked inevitable, as the final three wickets dropped with the hosts stuck on 269, with Madsen the last man out, caught and bowled by Liam Plunkett.

"Yorkshire skipper Andrew Gale says his team have " six cup finals" as they bid to win the first division title to mark their 150th anniversary.

"On the third day, Yorkshire grabbed 15 wickets to win by an innings and 113 runs. All the bowlers contributed and the victory charge was held up for a time by a sparkling 141 from Wayne Madsen.

"But Derbyshire were outclassed. One point for the home side and 24 for table topping Yorkshire, who have six big Championship games to go."