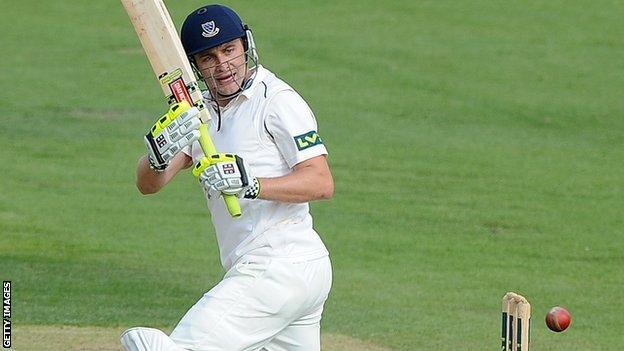 Luke Wright hit an unbeaten 151 and Monty Panesar took 5-95 as Sussex fought back from a first innings deficit of 267 against Middlesex.

Wright came in with his side in danger of an innings defeat - rocking on 45-4 in their second innings.

Earlier Panesar took four of the last five Middlesex wickets in their 496.

The visitors resumed on 445-5 but the England spinner's efforts saw their last five wickets fall for just 20 runs.

Sussex's first four second-innings wickets fell to four different Middlesex bowlers, including Steve Finn, who had been omitted from the England Test team on Thursday.

But Wright then took control - scoring his runs from just 170 deliveries.

Sussex, second in the Championship table, still face a tough task to avoid defeat on the last day but Wright has kept them in the game.