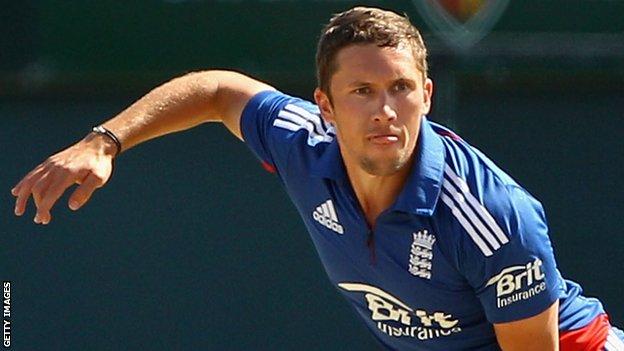 Lancashire head coach Peter Moores believes it is a matter of time before Simon Kerrigan plays for England, after taking 12 wickets against Glamorgan.

The 24-year-old left-arm spinner has played for the England Lions but is yet to make his full international debut.

His improvement in his batting and fielding, never mind his bowling, has been significant

Kerrigan has taken 20 wickets in two games, including 7-63 at Northants.

"I think Kerrigan is an international bowler of the future, without a shadow of a doubt. I think England think that as well," said Moores.

"He's been groomed in some way to move onto higher things. He's very hungry and very passionate."

The Preston-born spinner played sporadically behind Gary Keedy during the 2011 County Championship-winning season, but did take his career-best figures that year, with 9-51 at Hampshire.

Since Keedy's departure to Surrey, Kerrigan has become the first-choice spinner at Old Trafford and is the joint leading wicket taker in County Championship Division Two this season, with 44 so far.

"His improvement in his batting and fielding, never mind his bowling, has been significant," Moores told BBC Radio Lancashire.

"He's an attacking bowler, an attacking spinner who has always taken wickets from getting five on his debut."