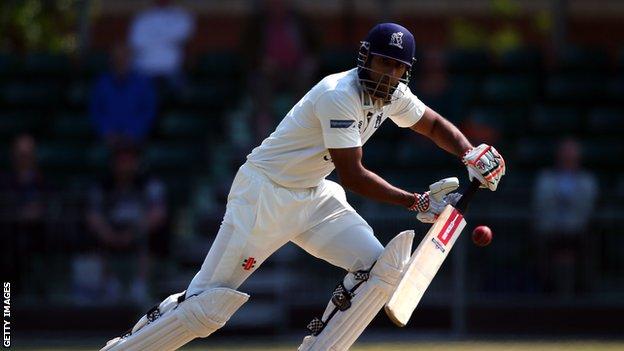 Warwickshire stand-in captain Varun Chopra believes his side's hopes of retaining their Championship title have been rekindled by their recent form.

Off-spinner Jeetan Patel, with match figures of 8-128, led them to a 216-run win over Nottinghamshire on Thursday - their second straight Championship win.

The result puts them 28 points behind leaders Sussex with six games left.

Patel's excellent figures proved decisive on a slow Edgbaston pitch and Chopra, leading the side in the absence of Jim Troughton, hailed his bowlers for their performance in the difficult bowling conditions.

"When the wicket is like this at Edgbaston, trying to get 20 whichever way you do it is always difficult," he said.

"We played games against Lancashire and Surrey and made them follow on, and they just batted out the whole day.

"But our bowlers were fantastic today, all came in hard, and we got our rewards."

Chopra's side now face five FLt20 matches before their next Championship match at Yorkshire.

And the 26-year-old says the teams they face in the business end of the season could mean they have a real shout of retaining the title.

"We know we've got to play the sides above us still, going to Yorkshire and with Sussex coming here, so we know if we take points off them we'll be right back in the mix.

"Last time we were at Yorkshire, we gave them a good hiding. If we're playing good cricket, we should be a match for most sides."