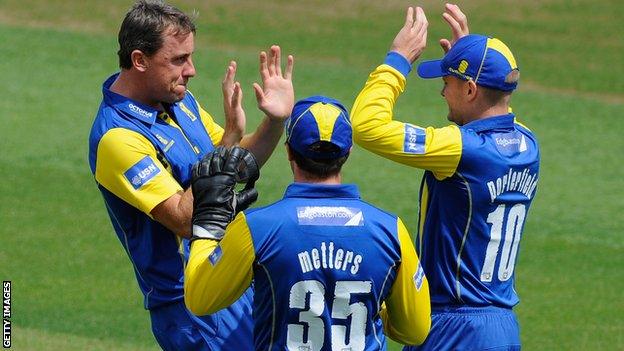 Northants suffered only their second T20 loss of the summer as Warwickshire edged home by three wickets with three balls to spare at Edgbaston.

The visitors lost two wickets before reaching double figures and despite Kyle Coetzer's 33, were bowled out for 111 as Steffan Piolet took 3-24.

The Bears struggled on 37-4, but Rikki Clarke hit three sixes in one over from Matthew Spriegel before falling for 36.

And Spriegel suffered again as Jeetan Patel cleared the rope to seal the win.

Left-arm paceman David Willey bowled well for figures of 3-22 from four overs, his victims including Clarke, who holed out at long-on, but Alex Wakely had to rely on Spriegel's off-spin for two of the last three overs and Patel took advantage by launching the final blow over mid-wicket.

Despite the result, Northants remained top of the Midlands, Wales & West group with 10 points from seven matches, while victory left Warwickshire fourth with six points and still with only an outside chance of qualifying for the knockout stage of the competition.