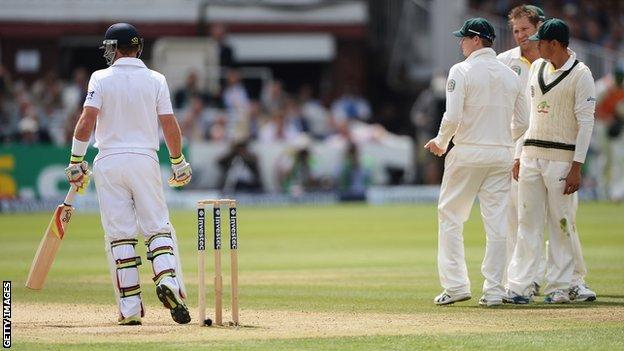 Cricket Australia has apologised after a tweet containing expletives was sent from its official account during the third day of the second Ashes Test.

The message came after the decision by television umpire Tony Hill not to give England batsman Ian Bell out at Lord's.

Bell appeared to be caught just above the ground by Steve Smith at gully.

Cricket Australia said: "Apologies for the inappropriate tweet regarding the Bell catch. It didn't emanate from CA's official Twitter presence at Lord's."

A CA spokesman said several employees in Australia had access to the account and were in charge of posting updates. The matter would be investigated, he added.

"Cricket people who've played the game know that is out. Television cameras foreshorten the pictures."

On the Bell decision, a further tweet read: "What has happened there? Smith takes a low catch at gully. Bell stands there. Umpires review. Looks out. Guess not."

The account remains operational and further score updates have been added since the offensive tweet was deleted.

With the game - and potentially the series - slipping away from Australia, Bell cut Ryan Harris and was taken low by Smith.

Bell shrugged to suggest he was unsure whether the catch was clean, and the on-field umpires referred the decision to Hill.

After a short delay, and despite replays appearing to show Smith's fingers were under the ball, Hill ruled there was insufficient evidence to give Bell out.

"That's a bad decision," said former England opener Geoffrey Boycott on BBC Test Match Special. "I bet I could go along the corridor to all the ex-players working on the game and most of them will say out; we just know from experience. That's not technology; it's human error."

The incident was the latest in a series blighted by umpiring controversies. In the first Test at Trent Bridge, which England won by 14 runs, Australia debutant Ashton Agar survived a debatable stumping on six before going on to make 98.

England's Stuart Broad was given not out after edging Agar to slip and Jonathan Trott was given out lbw by the third umpire, a decision the International Cricket Council later admitted was wrong.