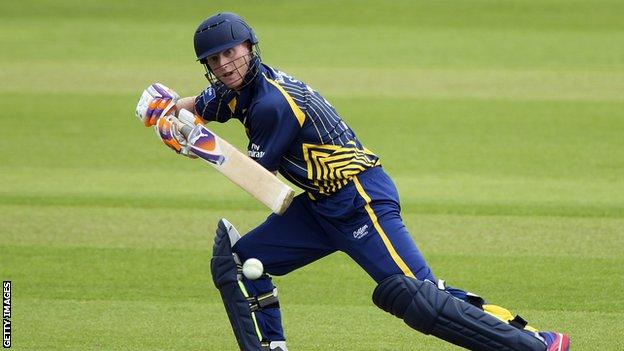 Ben Stokes's stunning 46 from 24 balls helped Durham leapfrog Derbyshire into third in the FLt20 North Group with a four-wicket win at Chesterfield.

After a disastrous first over in which Wes Durston was run out, useful knocks from Chesney Hughes and Wayne Madsen (both 32) saw the hosts to 136-7.

Durham also began badly, slumping to 36-4 in the eighth over.

But Stokes, after 72 not out at Trent Bridge on Friday, and Gordon Muchall put on a decisive 77-run stand.

After both fell to Durston, Michael Richardson saw the visitors home with eight balls to spare with a six off Tim Groenewald.

Youngster Stokes's knock included five sixes and showed the talent of a player who was involved in England's recent Twenty20 internationals against New Zealand.

The all-rounder's form in this competition has helped Durham move into contention for a quarter-final berth following back-to-back victories.