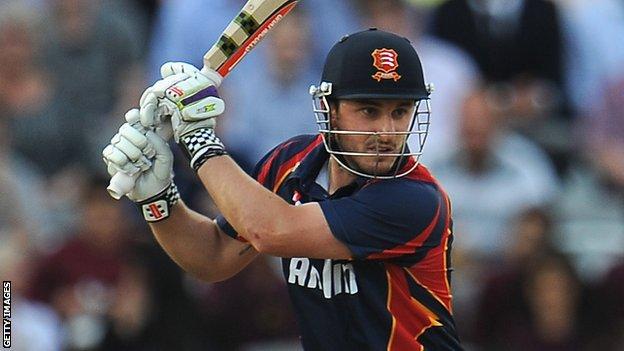 Hamish Rutherford smashed 84 off 43 balls as Essex easily chased down 147 to beat Sussex by seven wickets.

The New Zealander hit five sixes and nine fours as he shared an opening stand of 115 with Greg Smith (42).

Rutherford was stumped off Will Beer towards the end but the damage had already been done and Essex cruised home with 17 balls to spare.

The Sussex innings saw a number of batsmen make starts, but they lost wickets at regular intervals and the total never looked enough on a lightning Hove outfield.

With Rutherford hitting the bowlers to all corners, Essex raced to 105 without loss in just 10 overs.

The scoring slowed when Smith and Rutherford fell to Beer, shortly followed by Ravi Bopara on seven from Michael Yardy, but Owais Shah (nine not out) and Ryan ten Doeschate (2no) saw the Eagles over the winning line.

The result moves Essex up to second in the South Group table with 11 points from eight games, while Sussex are already out of the competition with just one victory so far.