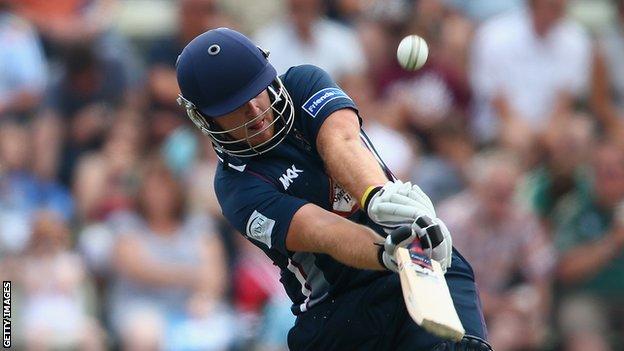 Richard Levi struck six sixes in his innings of 70 as Northamptonshire claimed a five-run win over Worcestershire in the FLt20.

The big-hitting South African also hit five fours in his 43-ball knock but Northants were restricted to 137-6.

Andre Russell looked to be guiding Worcestershire to victory but once he fell for 44 the innings faded.

With 21 needed off the final over, Joe Leach hit a four and a six off Lee Daggett, but it was not quite enough.

Levi, who scored 110 not out against Gloucestershire last week, hit Leach for three sixes in a row as he raced to his half-century.

But once he fell to Gareth Andrew's first ball the rest of the innings stuttered as Northants could only muster 35 off their last six overs.

Worcestershire lost three quick wickets as they fell to 35-3 but captain Daryl Mitchell and Russell put on 64 for the fourth wicket.

David Willey (3-13) took the crucial wicket of West Indian Russell and Mohammad Azharullah chipped in with 2-22 as Mitchell was left stranded on 38 not out.

The win means Northants stretch their lead at the top of the Midlands, Wales & West Group to four points and are all but certain to qualify for the quarter-finals.