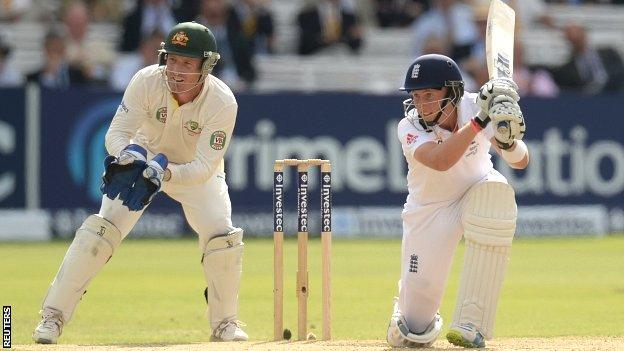 Joe Root savoured the "special" feeling of scoring an Ashes hundred which he hopes will inspire an England victory.

Root, missed on eight on Friday, made 178 not out as England reached 333-5 for a huge lead of 566 on another one-sided day in the second Test at Lord's.

"I knew how important hammering it home for as many as possible was," he said.

"It was pretty special. As a kid growing up playing the Ashes is the pinnacle and to get a hundred and at Lord's as well was a nice feeling."

At 22 years and 202 days, Root becomes the youngest England batsman to make an Ashes century at Lord's.

Former Cambridge University and Sussex player Kumar Shri Duleepsinhji was aged 25 years and 14 days when he made one in 1930.

The Yorkshireman added: "We are now in a good position to hopefully go on and set ourselves up for the win. I'll definitely enjoy it more if we can get the win out of it."

Root - watched by his parents in the stands and younger brother Billy as 12th man - became, at 22 years 202 days, the youngest Englishman to score an Ashes Test hundred at Lord's.

And partnerships of 99 with nightwatchman Tim Bresnan and 153 with Ian Bell ground a hapless Australian side into the north London turf.

With no declaration signalled, he could yet push on to make his first Test double-century when play resumes on Sunday morning, having moved past 1,000 first-class runs in the summer when he passed 70 midway through the afternoon session.

He said: "You just want to score runs; it doesn't really matter where. I just want to keep contributing and scoring runs for England. I'm sure mum and dad will be slightly worse for wear this evening.

"I have no idea about the declaration. That's up to Cookie [captain Alastair Cook]. I just want to concentrate on playing my part."

"Joe Root is a modern player who has been raised on Twenty20 cricket. The reverse sweep is part of his game but players like myself and Colin Cowdrey didn't even know that shot existed. It never crossed our minds to play it."

Australia fast bowler Peter Siddle said he expects England to bat on and declare some time during the morning session.

"Hopefully we can get a couple of early wickets, make them think about how long they want to bat and do as well as we can when we get a stick in our hands," he said.

The tourists will then set out to save the game on a pitch offering considerable turn to assist off-spinner Graeme Swann, who took five wickets in Australia's first-innings 128.

"We'll have to work hard and bat a bit better against Swann than we did in the first innings," added Siddle.

"The wicket didn't play too bad today. Day five is going to be the biggest worry. The footholes will get bigger as the day goes on."

Former Australia fast bowler Glenn McGrath admitted that the current side are now almost certain to go 2-0 down in the five-match series.

McGrath told the BBC's Test Match Special: "It was a horror day for Australia, probably even worse than Friday.

"I think England will bat on to rub more salt into the wounds. Graeme Swann and James Anderson will be keen to bowl but England will want to keep their foot on Australia's throat."

Listen to Jonathan Agnew and Geoffrey Boycott's analysis of each day's play on the Test Match Special podcast.