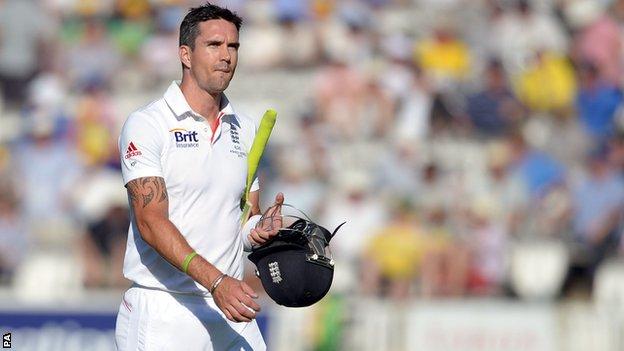 England batting coach Graham Gooch admits the injured Kevin Pietersen may miss the third Ashes Test as well as the remainder of the second.

Pietersen had a scan on Saturday which revealed he has a left calf strain, and will not take the field as England look to go 2-0 up in the series at Lords.

Gooch said: "Kevin has got a small strain in his calf and there's a doubt over his selection for the next Test.

"James Taylor's having a good year. The selectors will look at the options."

This season he has scored 824 runs in 15 Championship innings at an average of 58, with two centuries and four fifties, and a best of 204 not out against Sussex in June.

Gooch told the BBC's Test Match Special: "They also have to look at the conditions at Old Trafford. Once you decide what the pitch is like you decide who the replacement will be.

"Spinners are flourishing in this sort of weather so I think once you decide what the pitch is going to be like you'll decide who the replacement will be if Kevin is not fit, but there are plenty of good young batsmen around."

Pietersen suffered the injury while fielding in Australia's first innings on Friday and looked uncomfortable when he went out to bat later in the day.

He made only five runs before reaching away from his body and hitting bowler Peter Siddle to point.

It is only Pietersen's second Test since recovering from a knee problem that forced him to return early from the New Zealand tour in March.