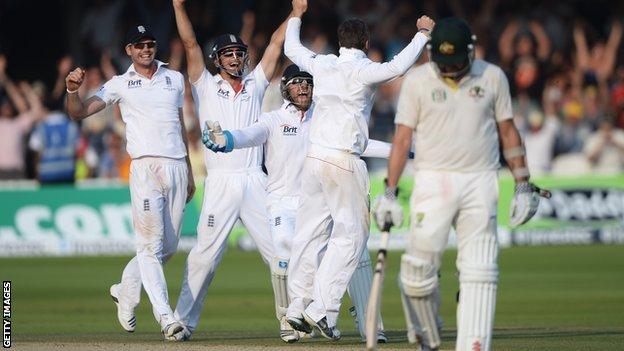 Victory inside four days at Lord's gave them a 2-0 series lead, something no England team have achieved in a home Ashes in 123 years.

"It is certainly too early," said Cook. "But it is a winning habit.

"We won't be taking anything for granted or taking our foot off the pedal. That is not how this England side works."

Graeme Swann claimed 4-78 as England bowled Australia out for 235 with four balls remaining on Sunday to complete their third biggest victory in Test history in terms of runs.

On the first day they slipped to 28-3 but were never again in trouble, bowling their great rivals out for just 128 in reply before declaring on 349-7 to set Australia a notional 583 to win.

England have now won the last four Ashes Tests, and five of the last six.

Cook said: "At certain moments in this game we were right under the cosh, but it is to the credit of the players that they dealt with those moments.

"We have to give credit to the way we bowled in the first innings. Our bowlers have dug us out.

"A few of the boys were keen to finish it tonight and we just about got there in the end."

Opposite number Michael Clarke insists Australia can bounce back in the third Test at Old Trafford, which starts on 1 August, but admitted they have been outclassed so far.

He said: "I am still confident we can win this series. I heard a lot of the crowd laugh when I said that but we have seen just about all our top order can make a fifty; we need someone to go on and make a hundred.

"But I don't want to take any credit away from England. They have outplayed us in both Test matches.

"We need to perform better to win this third Test. We will do everything we can to win. We have plenty of talent. The boys can do it; it is just about doing it consistently."

Only once have Australia won the Ashes after losing the first two Tests - in 1936-37, when a side featuring Don Bradman came from 2-0 down to win the series 3-2.

Only Clarke and Usman Khawaja passed 35 in either Australia innings at Lord's. While the tourists' pace attack has sometimes looked threatening, teenage left-arm spinner Ashton Agar has struggled and the top four have repeatedly failed.

Clarke conceded: "We let ourselves down. We have plenty of experience in our top seven but our shot selection was poor and we just did not have the discipline England had.

"The boys fought well today but I am most disappointed with our performance in the first innings with the bat. You have to bat for long periods to make runs."

Root was named man of the match after 180 in the second innings and accounting for Clarke and Khawaja to induce an Australian collapse on the fourth afternoon.

"I've loved every minute of it," Root told BBC Sport. "It's been a great Test and the most pleasing thing is that everyone has contributed.