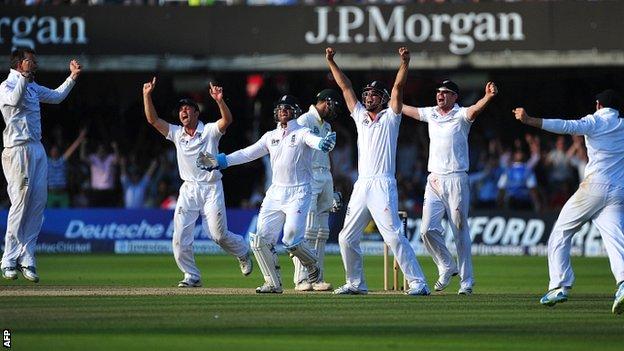 As someone who was on the wrong end of seven Ashes series defeats in my career, I am thoroughly enjoying seeing England dominate this Test series.

After a close finish at Trent Bridge, England's 347-run victory at Lord's exposed the huge gulf in class between the teams.

The challenge to Alastair Cook and his team now is to go for broke, because if they keep their foot firmly on the gas there is every chance they could pull off England's first 5-0 whitewash over the Aussies.

England have claimed eight out of nine Ashes series after winning the first two Tests, the only exception coming with Donald Bradman in the Australian team, down under in 1936-37.

For several members of this team, a clean sweep would represent some sort of payback. Cook, Kevin Pietersen, Ian Bell and James Anderson all played in the humiliating 5-0 defeat down under in 2006-07 and will be determined not to let this opportunity slip through their fingers.

A sign of a great team, as opposed to just a good one, is that they recognise when they have their opponent on the ropes and really go for the jugular.

This is how the outstanding West Indies and Australia teams played when they were sweeping aside almost every opponent that was put in front of them.

In the past two Ashes series, England have taken a 1-0 lead, but then faltered badly at Headingley and Perth to allow Australia back into the series.

Although they went on to win the Ashes in both cases, this time they must make sure their level does not dip and try to build up a momentum and confidence that they can carry into the return series down under, which starts in November.

In fact, the encouraging thing from England's point of view is that they still haven't quite played to their full potential.

Cook, Pietersen, Jonathan Trott and Matt Prior are all averaging below 30 with the bat, while Stuart Broad has so far only taken four wickets at 43.50.

"When you win in four days and are so much better than the opposition, you can't criticise England. I think Australia will hope to get better but I'm not sure they can. England will just win again."

At Trent Bridge, they were bowled out for 215 and given an almighty scare by Australia's last-wicket pair on the final day. At Lord's, they had to recover from a poor start in both innings when losing three early wickets but then recovered very well.

Bell's first innings partnership with Jonny Bairstow got England back in the game but I still believe a total of 361 was just below par on an excellent batting wicket.

The game hinged on an Australian batting performance which I can only describe as shambolic. To be bowled out for 128 on a good surface is unacceptable.

From that point on, the match was only ever heading in one direction and it was over to Joe Root to make sure England capitalised on their advantage.

Australia's muddled display revealed both mental and technical failings that could take some time to heal.

They have now lost six Tests in a row for the first time since 1984 and it is 10 matches since a member of their top three made a century.

Two years ago, the Argus review overhauled the management, coaching and selection structures around the Australian national team.

A fortnight before the Ashes, they sacked Mickey Arthur and brought in Darren Lehmann as coach in an attempt to galvanise the team.

Now, quite simply, it is down to the players. Starting at Old Trafford on 1 August, they need to play in a far more responsible way, still looking to take the positive options, but not being reckless in their decision-making or stroke-play.

Only time will tell if Michael Clarke's men have it in them to put Australian cricket back on track.

But if England can show a ruthless streak it may not be until after the back-to-back Ashes series that we really start to see an upturn in their fortunes.

If Kevin Pietersen's calf strain is serious enough to rule him out of the third Test in Manchester, England have plenty of alternatives to choose from.

Nick Compton, James Taylor, Michael Carberry and Eoin Morgan will all be hoping for a chance to resurrect their Test careers, while Yorkshire pair Andrew Gale and Gary Ballance along with Warwickshire's Varun Chopra are among the top performers in the County Championship this season.