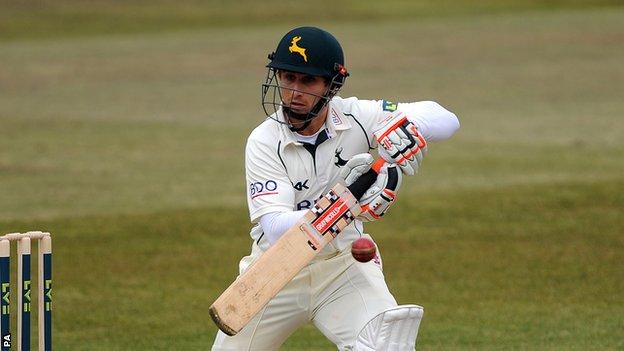 Pietersen picked up a left calf strain in the second Test against Australia.

And batsman Taylor, who has played two Test matches, has a Championship average of 58.85 for Notts this season.

"In terms of runs and confidence, he's in a good place [for a call-up]," Newell told BBC Radio Nottingham.

Taylor made scores of 34, 10 and four in his only previous Test experience against South Africa.

"I think England will sit down, make a few phone calls and pick the right batsman for the team.

"His form is good, and it will very much come down to the opinion of the selectors and [England coach] Andy Flower."

The diminutive 23-year-old's previous Test experience came against South Africa last summer, but he has been a leading member of the England Lions squad since then.

"James is still knocking the door down with his runs in county cricket, he's still well thought of at the Lions level and I'm sure it will be a matter of time before he gets a chance again," added Newell.

Asked about Pietersen's fitness, Gooch said: "The selectors will decide if they need cover, I'm confident there's some good talent.

"James Taylor made his England debut last year and showed up pretty well at Headingley, Nick Compton has been in the side this winter, and there will be one or two others who have done well for the Lions so they will have to look at the possible options."