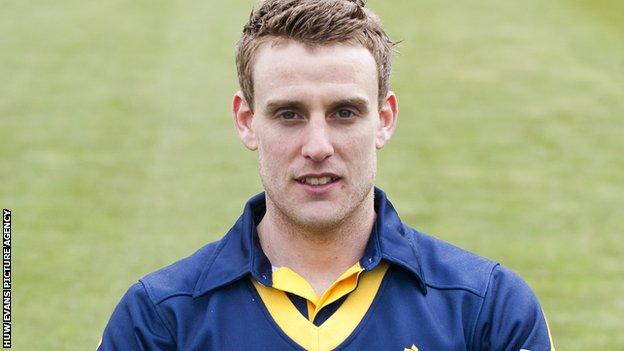 Ben Wright hopes Friends Life Twenty20 victory over Worcestershire will have given Glamorgan confidence ahead of their final two group games.

Glamorgan revived their hopes of reaching the quarter-finals with a five-wicket win at the Swalec Stadium after three successive defeats.

"Hopefully it gets the momentum going into the last two [games]," batsman Wright said.

Glamorgan's final two group games are at home in Cardiff.

"We obviously need to win our two remaining ones and [the win over Worcestershire] was the starting of getting back on the wagon and winning games," Wright added.

"We're just going to take one game at a time."

Midlands, Wales & West Group leaders Northamptonshire are the visitors to the Swalec Stadium on Friday, before Gloucestershire visit Cardiff next Tuesday.

Glamorgan remain in contention for a place in the quarter-finals after recording their fifth victory in this season's competition.

Wright, who hit an unbeaten 22, got Glamorgan's winning runs but the middle-order batsman's opportunities have been limited this season.

And the 25-year-old was determined to make the most of his chance as Glamorgan completed a FLt20 double over Worcestershire.

"I think it makes you a bit more hungry when you get that opportunity," Wright said.

"I didn't feel at any point that I was going to give that up for anyone.

"We're doing well at the top order so I'm happy that we are winning."