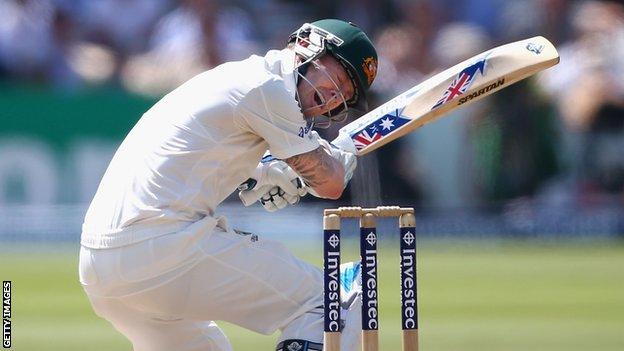 Former Australia fast bowler Jeff Thomson admits he was "embarrassed" by his country's batting performance in the second Ashes Test loss at Lord's.

"I'm embarrassed. I hope like hell they can do something in Manchester," Thomson, 62, told BBC Radio 5 live.

"We just said it's the worst batting we've ever seen in our life. Then they turned around and did it in the second innings."

Australia were bowled out in their second innings for 235 late on the fourth day, after England had set them 583 to win by declaring on 349-7. They had earlier been dismissed for 128 in their first innings.

The visitors, who also lost a thrilling first Test by 14 runs on the final day at Trent Bridge, go into the third Test at Old Trafford, starting on 1 August, facing the prospect of a series defeat.

Thomson, who took 200 Test wickets before retiring in 1986, is regarded as one of the fastest bowlers to ever play Test cricket.

His bowling partnership with Dennis Lillee was one of the most fearsome in Test cricket history.

He said: "I was impressed with the guys in the first game in Nottingham. I was proud. I thought these guys aren't that great but they're fighters. Then they came out at Lord's, and the bowlers did a fair job.

"I thought that was very good, then we're out in 50 overs. And the shots they played, I was so angry."

"I can't feel sorry for them because we've had many beatings from them," he told BBC Radio 5 live. "Losing is very hard and they do tend to rub your nose in it, especially if you are in Australia."

He said it was important for England not to let up, adding: "They have to keep the foot on the Australian throat and make sure they don't get up."