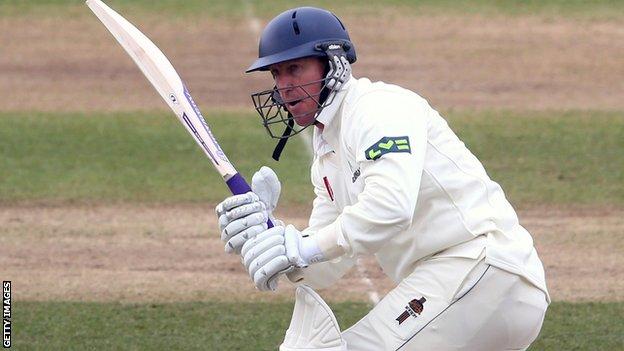 Murray Goodwin hopes his performances with the bat this season with Glamorgan will lead to an extended contract.

A season average of 56.78 runs in the County Championship, plus impressive shows in limited overs cricket, have activated a one-year extension offer.

But the 40-year-old Zimbabwean is hoping either Glamorgan or one of their rivals will offer a two-year deal.

"I want to play county cricket next season and I have had people enquiring on my future," Goodwin said.

"Ideally I wanted a two-year contract when I came here and then we sorted out a scenario where I had to achieve certain things.

"But I'm very grateful that Matthew [Glamorgan head of elite performance Mott] got in contact with me, so we'll just play it by ear.

"I've got family reasons to think of, I've also got my own personal things to think of... but ideally I'd like to be playing county cricket for the next couple of years."

Goodwin is on a one-year contract with Glamorgan in spite of asking for a two-year deal when he joined from Sussex.

His performances mean he has been offered a further year with the Welsh county, but Goodwin is hoping his next deal is at least twice as long.

"I still feel as though I'm performing in reasonable nick physically, I haven't missed a game through injury yet.

"I'm in no rush, I'm just going to weigh up the options and go from there."

Goodwin caught the eye with his innings of 194 against Lancashire in a drawn County Championship Division Two match, while his 59 off 37 balls helped Glamorgan beat Worcestershire to keep their Friends Life Twenty20 hopes alive.

Mott is understandably keen to keep hold of Goodwin after the veteran has proved his worth in all forms of the game.

"He's certainly someone I'd love to see at the club for at least another year, he's done everything that's been asked of him," Mott said.

"The club was good to offer him a position initially and there's clauses in there which he has already triggered for a second year in terms of run-scoring.

"He's eclipsed them by some distance already now, so I'm sure the club would love to hang onto him for at least another year.

"Everything he has been saying has been positive, he's enjoying his time here and hopefully we can sign him on for another year or two at least."