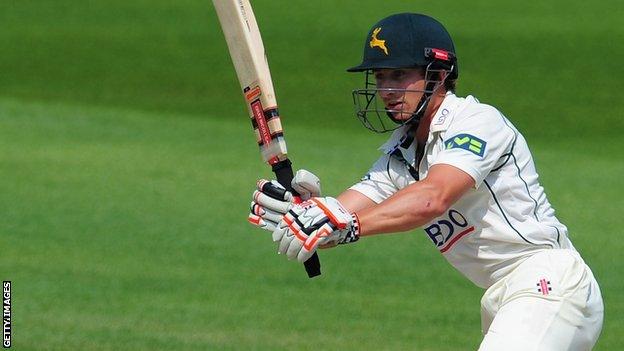 Nottinghamshire's James Taylor seems to be in line for an England recall after being picked for Sussex in Friday's three-day game against Australia.

England are waiting on the fitness of fellow batsman Kevin Pietersen ahead of the third Ashes Test at Old Trafford.

"This will provide him with a valuable opportunity to play in a longer format while we consider our options," said England team director Andy Flower.

Pietersen suffered a left calf strain during England's second-Test win at Lord's and is a doubt for next week's Old Trafford match, which starts on Thursday, 1 August.

Flower added: "Kevin is continuing his recovery from a calf strain and a decision about his availability for the Test will made nearer the time."

Taylor made scores of 34, 10 and four in his only previous Test experience against South Africa

Several names have been mentioned as possible replacements, such as Essex's Ravi Bopara and Yorkshire's Gary Ballance.

Right-hander Taylor would appear to be set for a call-up, having traded Nottinghamshire for Sussex at England's request for the match starting at Hove on Friday, but he is taking nothing for granted.

"I'm not back in the Test side yet but I'm pleased to be a step closer to it and I've always dealt with situations like this by concentrating on the game in hand and refusing to look too far ahead," said Taylor.

"I'm disappointed to have to miss two big Notts matches but the Sussex fixture will give me an opportunity to get some red ball practice and then I'll wait and see."

Taylor will miss Nottinghamshire's Friends Life T20 matches against Yorkshire on Friday and Lancashire on Sunday.

They do not have a County Championship match until 2 August and director of cricket Mick Newell said: "We want to provide James the best possible opportunity to be prepared to play in the third Test should he be required."

The 5ft 6in Taylor is no stranger to the Test environment, having made those two appearances last summer, scoring 34 in a 147-run stand with Pietersen at Headingley.

Meanwhile, Australia have rested six of their XI from the second Test for the game against Sussex, while paceman James Pattinson has been ruled out of the series with a back injury.

To fill out their side at Hove, the tourists have summoned Western Australia off-spinner Ashton Turner - one of several men playing club cricket in England this summer as part of a development link-up with county side Hampshire.

Turner has been playing for Chichester Priory Park in the Sussex Cricket League, and will figure in a side captained by Ed Cowan as skipper Michael Clarke and his deputy Brad Haddin are among those rested.