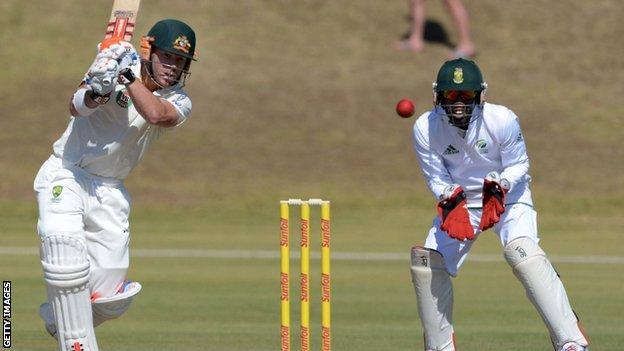 Australia batsman David Warner staked his claim for a recall for the third Ashes Test against England by scoring 193 for his country's A side.

Warner's 226-ball innings came on day one of a four-day match against South Africa A in Pretoria.

Warner, 26, was sent to Africa to gain match practice after serving a ban for punching England's Joe Root in a bar.

Coach Darren Lehmann said he had spoken to Warner about his behaviour and was prepared to give him another chance.

"The slate's pretty clean with him," said Lehmann, who replaced Mickey Arthur 16 days before the opening Test.

"We've spoken about it and dealt with it. We'll move on. Just sensible, straight down the line chat, and we won't have that issue again."

Lehmann must now decide whether to recall Warner for the third Test at Old Trafford, which starts on 1 August.

The tourists are 2-0 down in the series and must win in Manchester to keep alive their hopes of winning back the Ashes.

Australia are in desperate need of a boost.

Former Australia bowler Jeff Thomson, 62, said he was "embarrassed" by his country's batting in a 347-run defeat in the second Test at Lord's.

"I hope like hell they can do something in Manchester," Thomson told BBC Radio 5 live.

"We just said it's the worst batting we've ever seen in our life. Then they turned around and did it in the second innings."

Left-hander Warner struggled in his first tour match in Africa, making just six and 11 in his two innings against the Zimbabwean Select XI in Harare last week, but he produced a timely reminder to selectors of his talents.

He struck 29 fours and a six against South Africa A, sharing a 204-run fifth-wicket partnership with Glenn Maxwell.