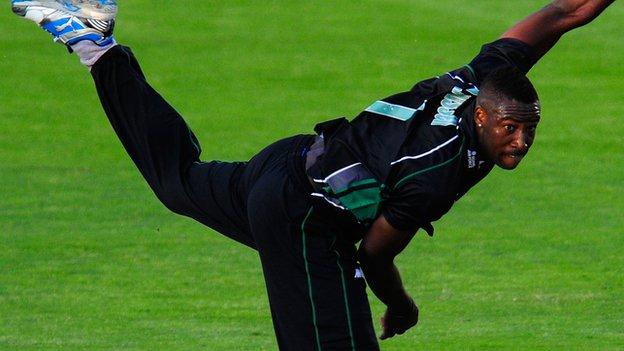 Worcestershire paceman Andre Russell has been passed fit for Friday's FLt20 derby with Warwickshire after a minor heart scare during Tuesday night's defeat by Glamorgan in Cardiff.

The 25-year-old West Indies fast bowler left the field after bowling just two overs, having suffered chest pains and dizziness, and was treated by doctors.

But following precautionary checks on Wednesday he was given the all-clear.

"He had palpitations and his heart was racing," said bowling coach Matt Mason.

"Thankfully there were some doctors in the crowd who came to take a look at him and they left him off the field to be on the safe side.

"He said he felt a bit strange coming in to bowl.

"He felt a bit dizzy, and he had chest pains, so he went off to get some help," Mason told BBC Hereford & Worcester.

Worcestershire director of cricket Steve Rhodes confirmed on Wednesday night that the Jamaican will be fit for Friday's match at Edgbaston as they look to avenge the seven-wicket defeat by their old rivals at New Road a fortnight ago.