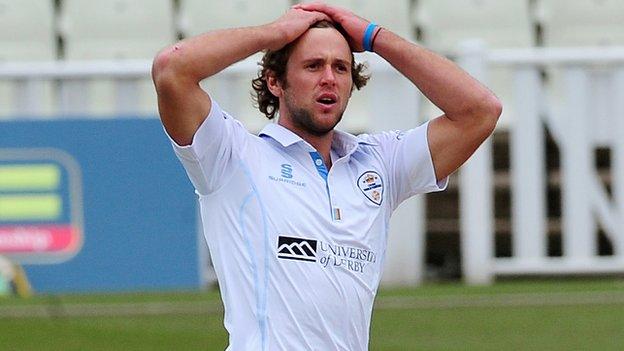 Worcestershire have signed Derbyshire all-rounder Ross Whiteley on a contract tying him to New Road until 2016.

The 24-year-old Yorkshireman has joined for the remainder of the summer and three further seasons.

"While we are disappointed to lose him, we have sufficient quality in the squad to make up for his departure," said Derbyshire head coach Karl Krikken.

But the left-hander has fallen out of favour in Division One this summer.

Despite hitting 637 runs at an average of 57.91 in grade cricket in Adelaide during the winter, he made a poor start to the English domestic season.

He was dropped after making just 26 runs and taking one wicket with his left-arm medium pace in this summer's first three Championship matches.

And his intention to return to Australia again this winter apparently did not find favour with the Derbyshire management.

"Ross intends to pursue his career during the winter in Australia, a move which does not fit in with our plans for a full winter pre-season with Derbyshire," Krikken said.

Worcestershire director of cricket Steve Rhodes said Whiteley would add depth and quality to their squad.

"Ross has served his cricket apprenticeship and, although opportunities at Derbyshire this season have been limited, he arrives ready to compete for a first-team place," he added.

"He has all round skills with bat and ball and a desire to progress his career to the highest standard."